Understanding the Relationship Between pH and Ammonia

What is pH (Power of Hydrogen)?

pH [Power of Hydrogen] is a measure of how acidic or basic your water is. The pH is measured on a logarithmic scale that ranges from 0.0 (most acidic) to 14.0 (most basic). The neutral point is at 7.0 and you should strive to keep your tank water as close to this as you can. Most tropical fish are happy with a natural pH level.

Betta fish pH levels should be between 7.0 to slightly acidic (8.5 at the high end)

What Is being Measured When the pH Levels are Tested?

When measuring the pH levels we are counting the amount of hydrogen (H+) and hydroxyl ions (OH-) present in the sample.

Reduced levels of hydrogen ions (more bonded) – When there is less hydrogen ions (H+) and more hydroxyl ions (OH-) present in the sample it will be more basic (greater than 7.0).

How a Logarithmic Scale Works

A logarithmic scale measurement go up ten-fold. Aquarium owners tend to forget this and how important this is when modifying the pH levels in your fish tank.

When you understand this it will help you realize why it is best to keep your pH stable and within the desired range for your fish. When your pH levels are even just a little off it can have a huge effect on your fish and their health.

pH level changes can cause the following issues:

A good rule to follow is to keep the pH level fluctuations to less than 0.2 within a 24 hour period. If you need to bring your pH levels down more than this you will need to do it slowly over time.

How Does pH affect Ammonia Levels?

There are two types of ammonia ions:Ammonia becomes increasingly more toxic in basic water, the reason goes back to the ions mentioned earlier.

When you use an ammonia neutralizer this acts as a binding agent and turns dangerous ammonia into ammonium. 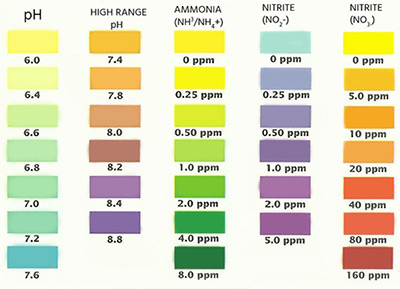 How Does Ammonia Convert into Ammonium and Back Again?

What Does All This Mean?

In basic water (pH higher then 7.0) makes it less harder for harmful ammonium to convert into dangerous ammonia. If you pH is basic you need to be more diligent regarding your water changes and water-testing.

To avoid ammonia poisoning cycle your tank and always keep your ammonia level at 0.

If you have acidic water don’t think you get off that easy.

Ammonia is a serious killer and even at low levels it can cause irreversible damage or death to your fish. You need to be testing your water regularly, keeping up with water changes and keeping your ammonia levels at 0.