In nature, aging Betta splendens would quickly succumb to predators but in the aquarium hobby they often live much longer then their wild counterparts. If we are lucky we will see our fish live out their full lives and eventually cede to natural causes. Before that time approaches you may notice your betta illustrating signs of aging, many of which can be observed in humans. 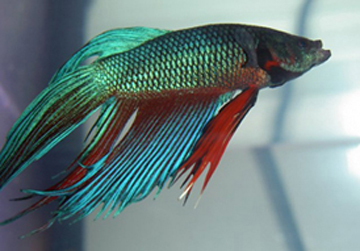 Here is a male betta at one year showing vivid colors and iridescents.

The average life span of bettas varies from 2 to 5 years. How long they live has to do with a combination of their genes and environment. Bettas exposed to stressors like poor water quality will likely not live as long as those that have been housed in good conditions consistently. Depending on where you buy your bettas you can often find out exactly how old your fish is. Breeders will certainly know the age of their bettas and smaller Ma & Pa fish stores may also know. If you buy yours from a large chain store you are often buying a fish that is already between 6 months to one year old. Size can sometimes give you an estimate. I’ve noticed smaller and likely younger bettas coming out of stores like PetCo and PetSmart over the last several years.

Little research has been done on aging aquarium fish. Until some formal studies are done all we have are our own observations. It’s important to first understand that there is a learning curve involved with the aquarium hobby and every specific species of fish. I often hear new keepers surmise that the death of their betta was old age even when the fish was only 2 years old. I admit I blamed the death of my first betta on old age even though I only had him 11 months. If I knew then what I know now I would have considered that the unheated, half-gallon, sporadically water-changed bowl I had him in probably had something to do with it.

If your betta is 2 years old and belly up it was probably something environmental, not old age.

Reviewing your care regimen may prove useful. If your betta suddenly becomes lethargic or looses color over a few days or weeks it may be a sign of disease. If the symptoms are very gradual and your attempts at curing them seem to be in vein then it may just be that your betta is getting old. For me, it was a number of symptoms increasing over many months before I realized that my betta might be in his senior years.

Signs of Old Age in Bettas 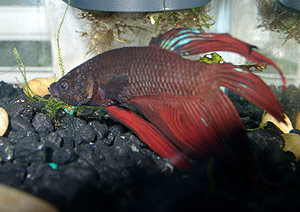 Here is the same male betta after 3 years of age.

Ok, let’s assume that your betta really is getting on in years. What are some of the symptoms you may notice? There are several physical changes that may occur. Most noticeably, his color may change subtly or dramatically over time and eventually become very dull and even brown. Iridescent coloration may fade entirely leaving a very bland or muted shade behind. Despite regular feeding you may notice the fish becomes gradually thinner and even bony. The individual scales may become more prominent and your betta may loose his scales more often. You may have noticed the occasional white, acne-like spot on your fish in the past. These are very common among bettas and don’t seem to cause any harm. Older bettas may develop these more frequently. Chronic fin rot may creep up. This fin loss tends to last indefinitely and does not improve with medication or changes in water parameters. It can develop in even the best water conditions. One of the most common physical symptoms of aging in bettas is loss of sight. You may find that your betta frequently lunges for food and misses or doesn’t recognize movement outside the tank like he used to. Some bettas develop what can only be characterized as cataracts. When observing the eyes you may see a filmy coating covering much of the eyeball that is also common in aging people.

Behavioral symptoms also present themselves in aging bettas. Lethargy is probably the most noticeable. Young, healthy bettas should be quite active, exploring their tanks and wiggling for their humans. Older bettas often lay in the plants or on the bottom of the tank most of the day. Again, this should be a gradual slow in activity levels. A betta that suddenly becomes lethargic may have an illness. Older bettas may not show the enthusiasm for food like they used to. They may show less interest in their humans or stop their “wiggle dances” entirely. Their tenacity for flaring may lessen over time as well. A betta that used to put on a show for other males or his own reflection may not display with the gusto he once did. Both males and females may become much less aggressive as they get well past their breeding years.

Because older fish may be less able to fight off disease and more prone to illness then younger ones, it is important to be vigilant and take the appropriate measures to keep them healthy. Being consistent with water changes and providing a nutritious diet will help prolong your betta’s life.