Velvet Disease or Piscinoödinium or Oödinium pilularis is a parasitic infestation that is very common among both salt and freshwater fish. This parasite is opportunistic and is present in most commercial aquariums. When a fish is stressed due totemperature fluctuations, poor water quality or other stressors they become susceptible to the parasites.

Velvet Disease is classified as a dinoflagellate. It is both a protozoan like the Ich parasites but contains Chlorophyll so it is also considered a type of algae. It survives by finding a stressed host and attaching itself mostly to the gill or fin tissue where it kills the cells and consumes the nutrients directly from the fish. If left untreated it often leads to death. Physically, Velvet looks like a gold, rust or yellow dust, finely sprinkled over the fish. In fact, it can be so difficult to see that often a flashlight is needed to reveal it. This shiny powder appearance has lead to many other names besides Velvet including Rust and Gold Dust Disease. 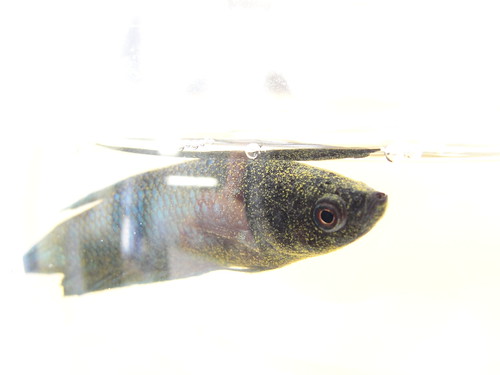 Photo by The Little Miss

If diagnosed early, Velvet is fairly easy to treat. First, you should remove your betta and place him into a hospital tank away from any other fish. Oödinium is highly contagious and keeping the infected fish in a community tank can put others at risk. Make note, the medications for Velvet may be toxic to other species like some fish, snails, invertebrates and aquarium plants as well. Also, any filter media should be removed so as not to eliminate the medication from the water. Next, slowly raise the water temperature to 80˚F – 82˚F [26.6˚C – 27.7˚C]. Because you don’t want to further stress you fish, be sure to only increase the temperature by no more then 2˚F or 1˚C in a 24 hour period. A more rapid temperature fluctuation could cause additional harm. It’s recommended you use a commercial Velvet medication like Mardel’s CopperSafe® or Jungle’s Velvet Guard®. Reducing the amount of light getting into the tanks by keeping the hood lamp off and covering the tank may help to combat the parasites as well.