The set up generally consists of a clear glass vase stuffed with a Peace Lily and a Betta fish. The lily’s roots hang down into the water below where the Betta is kept. Sometimes the vase will contain marbles or gravel on the bottom. Often the arrangement contains instructions stating that the fish can live by chewing on the roots of the plant and only requires weekly water changes with dechlorinated water.

I wasn’t going to write an article about the dangers associated with keeping a Betta in a Peace Lily vase because I felt it was already so well documented. There are websites, magazine publications and even petitions circulating to stop the selling of these vases. I myself haven’t even seen a Betta vase sold since 2001. I thought by now everyone knew better… Well at least everyone with some experience in Betta keeping.

Then this morning I stumbled onto one of the many online aquarium forums I frequent and discovered someone had posted a website selling Bettas in vases. That alone didn’t surprise me. I’ve seen people selling a lot worse online including Bettas kept in acrylic (5 x 7) picture frames and Bettas dropped into clear vinyl bubbles sewn into the front of a purse as a live fashion accessory. What surprised me was that experienced Betta keepers and even breeders were endorsing this set-up as a legitimate fish habitat. Sure, the majority involved with the discussion were renouncing the use of the vases but still there remains folks out there who are not only misinformed but defending and encouraging the arrangement. The danger of this is not to the experienced Betta keeper who knows better but to the new hobbyist who takes a breeder’s word as gospel. Worse yet, it sends a message to retailers that there is still demand for these vases. As long as there is a public desire to own them, there will be some store that will provide them.

A basic understanding of environmental science and Betta splendens biology will quickly make apparent the dangers of using a Peace Lily vase (or equivalent) as a Betta home.

First and foremost, the labyrinth organ is essential to survival of all Bettas and is one of the defining characteristics that make them unique and interesting to breed. The labyrinth organ allows Bettas and other Anabantoids to gulp air from the water’s surface. This is essential to their survival and a product of evolution. In the wild they often inhabit shallow rice paddies where dissolved oxygen levels are low. Gills alone wouldn’t allow them to get the oxygen they need so they surface to take it directly from the atmosphere. Bettas always use their labyrinth organ even when the water they inhabit is rich with oxygen. To deny a Betta direct access to the atmosphere is certain death and will be quickly hastened in a vase situation where there is no aeration in place. Essentially, the lily blocking the water’s surface will drown the fish. This reason alone is enough to condemn the use of Betta vases but if you need more reasons; I’ve got them.

Let’s talk about water quality and proper tank size. Generally, a Betta’s home should contain no less then one gallon of water but 3 gallons or greater is preferred. Small volumes of water quickly build concentrations of toxic ammonia caused by fish defecation, normal gill function and rotting plant matter. Even at low concentrations of .25 ppm or less, irreversible damage to Bettas’ gills and fin tissue can occur. Some may argue that plants can remove these harmful byproducts but it’s important to understand that aquatic plants primarily remove nitrate (the final byproduct of nitrifying bacteria) and may not be as effective against ammonia. Additionally, it should be mentioned that Peace Lilies are terrestrial plants and cannot survive well when their roots are fully submerged. Over a period of time these roots will breakdown in the water and increase the rate ammonia is produced.

Occasionally, you’ll hear a small bowl or lily vase compared to the rice paddies where wild Bettas are naturally found. There’s no doubt many of us have been told stories of the dreadfully shallow and muddy puddles where wild Bettas endure their tortured existence. Those poor wild ones could only be so lucky as to be housed in such lavish conditions as lily vase, right? Sorry, this is just another story steeped deep in misconceptions. It’s true that the rice paddies of Southeast Asia can get quite shallow and yes, even muddy but it’s important to understand that this environment consists of a complete ecosystem. During parts of the year rice paddies contain a small quantity of water but is fed from a much larger body. It is teaming with nitrifying bacteria and is constantly being refreshed and replaced. Aquarists strive to recreate these conditions in their home aquariums but are never able to fully reproduce what nature has supplied. Vases and other small bowls are nearly impossible to maintain. They frequently experience fluctuations in temperature and pH and may contain toxins like ammonia, nitrite and nitrates that in nature would otherwise be stable. 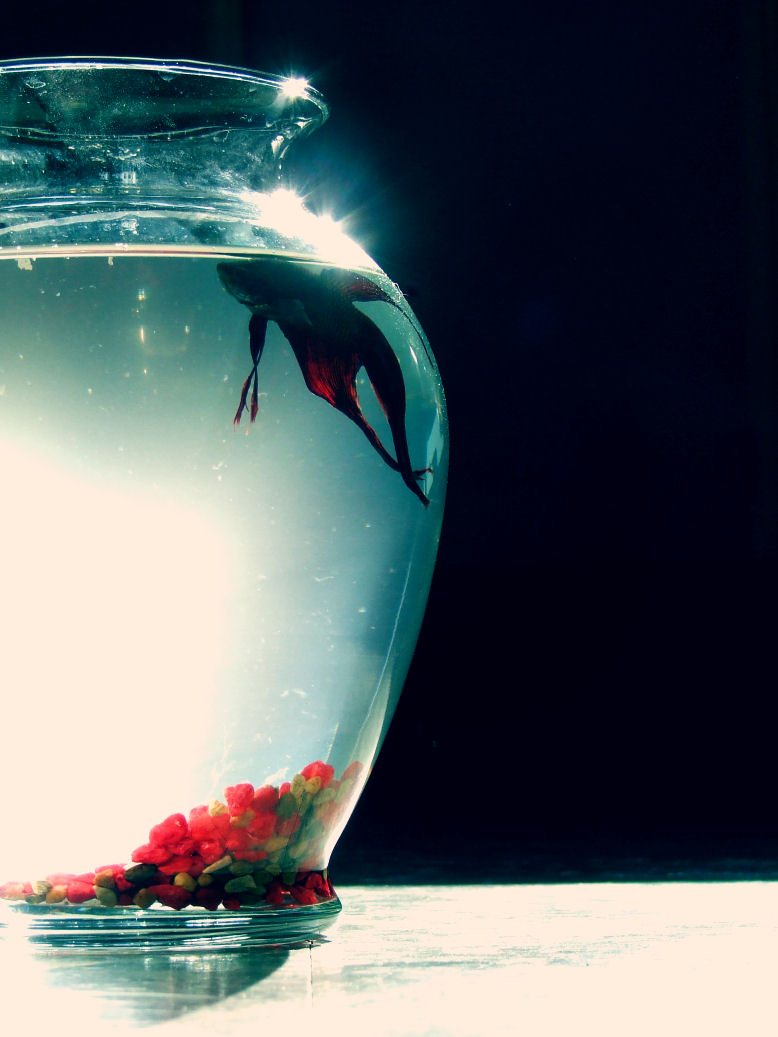 Temperature is another factor contributing to the dangers of keeping your Betta in a Peace Lily vase. Bettas are fully tropical and require water heated between 76˚F – 80˚F [24.4˚C – 26.6˚C]. These temperatures must be kept stable at all times and shouldn’t fluctuate more then 2˚F or 1˚C in a 24-hour period. These restrictions are nearly impossible, not to mention impractical, to maintain in a vase. Few people keep their homes heated to nearly 80˚F day and night so usually an aquarium heater is necessary unless there is a place in your home that meets the temperature requirements.

What about feeding on the Peace Lily roots?

Suggesting a Betta can survive on plant roots is ridiculous.

Bettas are carnivores and they require a diet high in protein complete with a variety of vitamins and minerals. They cannot survive on plant roots nor can they survive on microbial bacteria living on the roots of these plants; not even if the little pamphlet that came with the vase says they can. Bettas require a varied diet the best of which include insects, insect larvae, worms and small crustaceans like brine shrimp and mysis shrimp.

I know this has been a lot of information to digest at once but I know it more then disproves the myth that a Peace Lily vase is a suitable home for a Betta. Heck, it’s not even a suitable home for the lily. Put your lily in soil and your Betta in an aquarium and enjoy them both. They will both be healthier for it.