Why is my betta’s stomach so bloated? Is he getting fat?

A: A few things can cause a bettas stomach to bloat. Overfeeding is the most common culprit. Most fish food containers advise you to feed your betta what they can eat in two minutes. Because bettas tend to bloat it’s better to offer him just a small amount of food at a time. A bettas stomach is about as big as one of his eyeballs so feeding about that amount twice per day is safe. For a grown male that equates to about 3 – 4 pellets, large flakes or blood worms or a couple of brine shrimp. Dry foods like Betta pellets, Bio-Gold or freeze-dried bloodworms (not to be confused with frozen) contain less then 10% moisture and swell when introduced to water. A bettas natural diet consists of live insects and insect larvae that contain nearly 90% water. Some bettas have difficulty with the dry foods and will constipate. after eating them. To avoid this potential issue, soak dry foods in a cup of tank water for about 10 minutes before feeding allowing them to swell with water before entering the betta’s digestive track.

Bloating may also be a symptom Dropsy. Dropsy is a term that describes the final stages of organ failure. Unfortunately it is very common among bettas and is nearly always fatal. Bettas that do initially overcome it often succumb to it again in the following weeks or months. Dropsy is believed to be caused by bacterial, viral and/or parasitic infections/infestations. The bloating is caused by the build up of fluids internally and is often diagnosed by the telltale “pinecone effect” or a massively bloated abdomen that appears to be filled with fluid. Click to learn more about Dropsy.

Betta in final stages of Dropsy 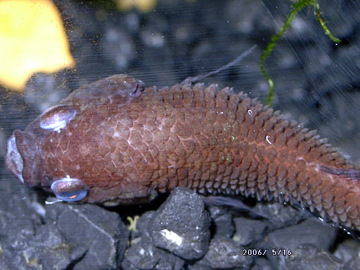