You are here: Home / Betta splendens / Female Bettas in a Community Tank 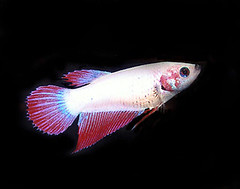 Hi Christie. I would like to put together a female betta tank but I keep getting conflicting information on how big it should be and the number of girls you can keep together safely. I really don’t think I can afford anything bigger then a 10 gallon aquarium. Please help.

A: I’m so glad to hear of your interest in female bettas. In the past they have been severely under appreciated but lately folks have begun to recognize that they are just as colorful and spunky as the boys. Even major chain stores like PetCo have begun selling them. Unlike male bettas, females can be housed together safely so you can enjoy more of them without all the five gallon tanks set up all over the house. (Not that there is anything wrong with that. 😉 )

A ten gallon is a good start for a “girl tank“, as those of us bettaholics call it. It’s large enough to cycle and to safely hold 3 female bettas, which is the minimum you would want to keep in an aquarium with multiple females. Certainly, one female is just fine too but we’re talking about a community set-up here. The reason you don’t want to keep two females together is because typically one will assume the dominant roll and act out aggressively toward the other. While less aggressive then the males, the females still tend to lash out. Keeping a three or more in a tank will ensure that the aggression is dispersed evenly lessening the possibility for severe injury.

1. Don’t overstock the tank. Bettas fight, even the girls, so don’t pack more then 3 in a 10 gallon. It’s better that they can find territories that they can call their own.

2. Do add lots of plants and hidey holes. Break up the sightlines so aggressive females aren’t always in view of the subordinates and so the weaker females feel secure. Brown thumb? Bettas don’t care if the plants are real or silk. You can try some driftwood or caves too.

3. Do have a contingency plan. Some females are just too aggressive for a community tank. Have a Plan B in place in the event that you have a real bully on your hand. This could be a spare tank, a friend or a local fish store that will take your female if she doesn’t play nice.

4. Do try a girl tank at some point. Females are a joy to watch and have magnetic personalities equal to if not better then their male counterparts. (Yeah, that’s right… I said it… what-da-ya gonna do about it?)