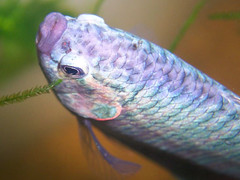 Me and Dad
Originally uploaded by Mean and Pinchy.

Paradisefish, like Bettas, have a labyrinth organ used to breathe from the atmosphere.

As I mentioned in a previous post I am going to integrate glossary terms with book, web forum and equipment reviews to supplement the usual Q&A on the Blog. Since this is primarily a Betta splendens Blog, I thought our first glossary term should directly relate to them. One of the major factors that make Bettas so desirable is their ability to be housed in smaller bowls without a filtration or aeration system. This is possible because they don’t require oxygen rich water to survive. They have the remarkable ability to surface for air. Of course this doesn’t mean we don’t have to take care of their water. Monitoring water quality becomes even more important because of their simple bowl set-ups. With that said, let’s discuss today’s term, labyrinth fish.

Labyrinth fish are fish that have a special lung-like breathing organ called a labyrinth organ, which allows them to take air right out of the atmosphere when they surface. This organ is located just above the gills and is made up of tiny folded bones that somewhat resemble a maze or labyrinth. These tiny bony plates contain blood vessels where the exchange of gasses occur when the fish takes a breath. This ability to pull oxygen right from the atmosphere is especially useful in slow moving or stagnant water where dissolved oxygen levels are very low such as ponds and rice paddies. It even means that some species of fish can actually exit the water, cross land and enter a new body of water without running out of oxygen. Fish who have this organ use it as a supplemental breathing apparatus and still have gills but will continue to surface for air regardless of oxygen levels in the water. There are many species of labyrinth fish that have been discovered but the most common include species of bettas, gouramis and paradise fish.

Have more questions about Labyrinth fish? Post them below in the comments section.