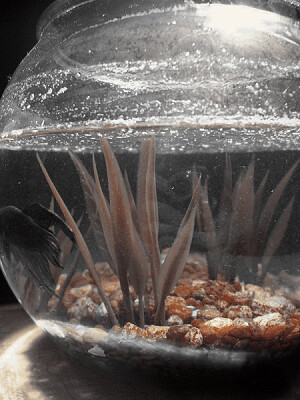 Dirty Tank (which has been cleaned!!!), originally uploaded by blaqphlegm.

In the aquarium, detritus (often called mulm) is organic material made up of fragments of fish waste, uneaten food particles, dead animals, mucus, shed skin and decaying plant matter. It is commonly suspended in the water and sucked into the filter but in conditions where there is little water movement, like Betta bowls, it can settle to the bottom and pile up into a fluffy brown or gray carpet. It can also be sticky or slick and may coat plants and decor. In a cycled aquarium this dead material is not dangerous in and of itself, but being high in nutrients it can lead to a rise in nitrate levels and algae growth. If not removed in an uncycled aquarium it will breakdown further into harmful ammonia. This toxin poses an imminent threat to fish and can lead to disease or even death. While ammonia is a major concern, the detritus itself generally isn’t and is just simply removed upon detection.

If you find detritus in your tank the easiest method for removal is by running a siphon a half inch or so over the tank bottom. Detritus is very light and is sucked up easily. In smaller Betta bowls, a simple turkey baster will remove the material. If detritus is a reoccurring issue in your tank you may want to consider installing a filter.