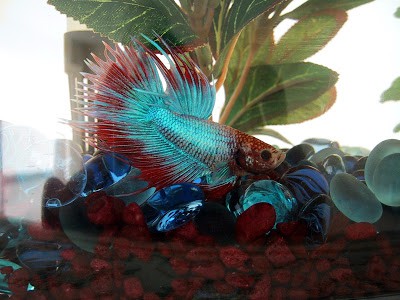 Photo of Phoenix submitted by SS

As somebody new to bettas, I just wanted to say that your site is one of the best built, most comprehensible and user-friendly that I’ve found! Keep up the good work!

I have a (hopefully) quick question for you about what appears to be ‘gulping’ by my betta. I haven’t had him very long (it’s my first one) and I don’t have a very good grasp of what is “normal” betta behavior. (Thanks to your site, I found out the bubbles he was blowing in the corner was a nest!) Every now and again, I see him open his mouth reeeaaaally wide and (apparently) gulp water into his mouth. This isn’t done at the surface to breathe or when eating; just swimming around the tank… Do you know why he does this, and is it indicative of anything abnormal in my new little fishy?

I’ve attached a photo of Phoenix, my CT betta, just chillin at the bottom of his tank; I’m such a proud new betta mommy. 😉

A: Thank you for the kind words about the site. It really means a lot.

I looked at your photo of Phoenix and wow, what a beautiful betta. His color is lovely and so vibrant and his fins are well expanded like they should be on a healthy fish. Very nice!

The gulping you describe is totally normal betta behavior. They often gulp air at the surface and will similarly gulp underwater, though less often. Some betta enthusiasts will refer to it as yawning or something similar to a yawn. We aren’t 100% certain why they do this but the general belief is that they are flushing their gills. You may notice when he gulps the water that he opens his gills at the same time.

As I mentioned, this is quite common with Bettas but still it is an occasional behavior. If your betta is flushing his gills very frequently, this could be a signal that he isn’t getting the oxygen he should. This could occur from a physical injury to his gills or labyrinth organ, exposure to ammonia, nitrite poisoning, or if he isn’t given access to the surface for air.

Chances are Phoenix is just fine and flushing his gills normally. If you are concerned that he is over-flushing, start by testing his water for ammonia and nitrite.