You are here: Home / Behavior / Betta with a Curved Body 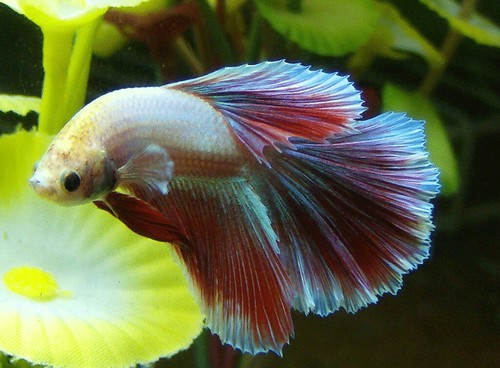 Hey Chistie, I need your urgent advice again. After a great recovery, Titan made a bubble nest and all (his 1st one) I was really happy. 4 days after that, he suddenly stopped eating and became a bit lethargic, less active. He now seems to have a particular way of swimming around, and kinda curves his body. I read some and thought he might be constipated or overfed or bladder disease, gave him some peas, he ate just a bit of that, and has been litering very very few. i also noticed, that his belly is a bit discolored, I don’t know if this is new or not, and a bit bloated on the left side, not much though. PLease help me, im attaching a picture to show you the way he curves. Thx a lot.

I forgot to add, that he also seems to “sink” head down, and struggles a little to be horizontal, and not horizontally angled with his head down. Thx a lot Christie, Im really worried.

A:Poor Titan has had a rough few months it sounds like. Obviously he has been through quite a bit with acclimating to a new home and then battling Velvet. I think the first and most important thing you need to do, since he continues to show signs of illness, is to test your water parameters. It is really the only way to understand what is going on in his water so that you can make adjustments or at least rule out water quality as an issue. This is especially important in Betta bowls as they don’t have the filtration system and beneficial bacterial colonies in place to help protect the fish. I urge you to purchase at least an ammonia and pH test kit to start. Other kits that can be very helpful are nitrite, nitrate, kh and gh testers. Titan may be prone to illness due to a genetic predisposition or the conditions in which he was kept before you owned him. Cycling a small aquarium with a filter and heater is the best thing for any tropical fish and is likely the wisest course of action for little Titan.

Here’s a link to more information on tank cycling: The Nitrogen Cycle & The Fishless Cycling Method

That said, I am quite concerned about his body curling and his inability to right himself in the water. It’s true that constipation can cause these symptoms if he has been excessively overfed. It tends to occur most often when Bettas are fed a lot of dry pellets that swell in the gut when exposed to water. This can lead to pressure internally and the inability to regulate the swim bladder. The swim bladder is the gas filled sack that fish use to control their buoyancy. What I find most worrisome is that the swelling appears to be more on one side. This could be a signal of an internal bacterial, viral or parasitic infection or even the early signs of Dropsy.

Before we fear the worst you may want to rule out constipation. I see you are keeping him in a glass bottom bowl without any substrate. This is a good idea when suspecting constipation. It will allow you to monitor how often he is excreting waste. In addition to observing him, consider fasting him for a day or two. Also, when you do feed him again be sure not to overfeed him. A betta’s stomach is about as big as one of his eyeballs and he should be fed that amount about twice per day. For a full grown male betta that equates to about 3 – 4 tiny pellets, two times per day. If you are feeding him pellets, soak them in a cup full of tank water for about 10 minutes before feeding so they can swell to full size before entering the digestive track. This will also help you to better gauge the actual size of the pellets you are feeding.

If after a day or two he still doesn’t excrete any waste, try feeding him a tiny portion of blanched pea. Blanching is just quickly cooking it in boiling water. I usually drop a pea into a mug, fill with water and throw it in the microwave for 45 sec to a minute. Then I run it under cold water so it won’t burn him when he eats it. Remember, don’t feed him the whole pea; just a tiny portion of the inside about the size of his eyeball.

Daphnia is also helpful in treating constipation in bettas. You can pick some up at most local fish stores and it acts as a mild laxative. It’s also nutritious and bettas love the taste.

I’m not totally convinced that Titan is just constipated so be sure to monitor him daily for new symptoms or signals that he is getting worse. Keep his water clean and keep an eye out for additional swelling or pine coning of the scales.

Good luck, and make sure you get that water tested.