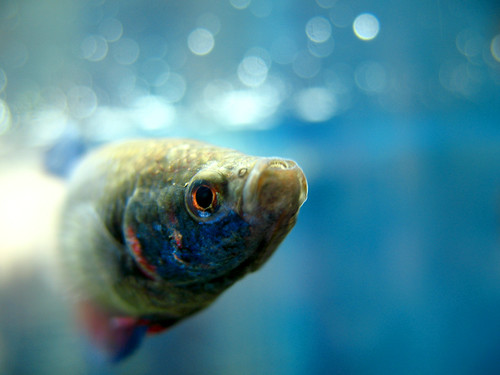 Hey there, I was wondering if I could trouble you with a quick question. Three days ago I purchased a betta. At the time, he appeared to be in good health, and when i brought him home, he swam in his new tank and ate all of his food. On the third day, he stopped eating and is hanging out at the top of his tank. His front fins appear “clamped” – they look like two little sticks. He is unreceptive to me – I gently tapped the side of his bowl and he did not move. Evey once in awhile he takes a big gulp of air. Other than that, he does not move. He is in a 1.5 gallon tank, the water was treated and left to stand 48 hours before his arrival. All the rocks and the fake plant are brand new and were cleaned before putting them in the tank.

It’s not dropsy – yet anyway – no scales are sticking out. I fear he may have velvet – his stomach appears to be goldish. Unfortunately, because he is a new fish, I do not know if this is indeed velvet, or if the goldish stomach was there to begin with.

Any help would be much appreciated.

A: To answer your question, adjusting to a new aquarium can be very stressful for any fish. Very often the new water can be quite different from the water they were kept in previously and the adjustment can really take it’s toll on the Betta’s immune system. It’s not unusual for fish to become ill within the first few weeks in their new home. To add to the problem, Bettas are often kept in less than ideal conditions while at the fish store and can leave with any number of illnesses of which Velvet is one of the more common ones. Here’s more information about Velvet from Nippyfish.net.

Velvet is classified as a dinoflagellate. It is both a protozoan like the Ich parasites but contains Chlorophyll so it is also considered a type of algae. It survives by finding a stressed host and attaching itself mostly to the gill or fin tissue where it kills the cells and consumes the nutrients directly from the fish. If left untreated it often leads to death. Physically, Velvet looks like a gold, rust or yellow dust, finely sprinkled over the fish. In fact, it can be so difficult to see that often a flashlight is needed to reveal it. This shiny powder appearance has lead to many other names besides Velvet including Rust and Gold Dust Disease.

If diagnosed early, Velvet is fairly easy to treat. First, you should remove your betta and place him into a hospital tank away from any other fish. Oödinium is highly contagious and keeping the infected fish in a community tank can put others at risk. Make note, the medications for Velvet may be toxic to other species like some fish, snails, invertebrates and aquarium plants as well. Also, any filter media should be removed so as not to eliminate the medication from the water. Next, slowly raise the water temperature to 80˚F – 82˚F [26.6˚C – 27.7˚C]. Because you don’t want to further stress you fish, be sure to only increase the temperature by no more then 2˚F or 1˚C in a 24 hour period. A more rapid temperature fluctuation could cause additional harm. It’s recommended you use a commercial Velvet medication like Mardel’s CopperSafe® or Jungle’s Velvet Guard®. Reducing the amount of light getting into the tanks by keeping the hood lamp off and covering the tank may help to combat the parasites as well.