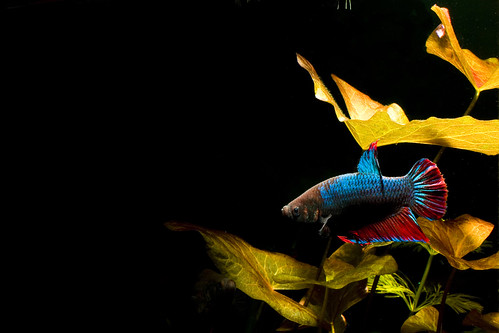 First, I want to tell you how impressed I am with your website! Thank you so much for providing such a rich resource to betta enthusiasts! I am concerned about my betta fish, Nino. I have had him for three months and he has been a great companion in my study, where I spend most of my time. He was in a 5 gallon aquarium, with no filter and no heater, and was really thriving. As winter is approaching, I wanted to provide him with a heater and a filter to circulate water. Considering how active he was — swimming back and forth through his tank most of the day — I decided to switch him to a 10 gallon tank. I was as careful as possible in the transition — I “seeded” the gravel from his old tank to his new environment + I mixed the new water with the water from his old tank and made sure it was the same temperature.Since Nino moved to his new aquarium, he has been increasingly less active, and this morning, he remains still at the surface of the water most of the time. He still eats. I should specify that the temperature in his aquarium has been pretty steady at 74-76 F since I got him. I have put the heater and filter in place, but I have not started them yet (I thought I should first give Nino a chance to get used to his new tank for a few days). The filter (duetto mini) does contain a very small charcoal cartridge (could that contaminate the water if not in use?). I have been using spring water from the time I got Nino and have been doing weekly water change. I have tested his water yesterday and today (with API Master test kit) and the reading are good : ammonia between 0 and .25, nitrite: 0; nitrate: 5.0. The pH is high — 8.0 — but I have been using the same spring water, and noticed high readings in the past as well.

Nino looked perfectly healthy and happy before the transition and I feel pretty bad seeing him still, with very little reaction to stimuli and noticing his condition getting progressively worse since yesterday. I wonder if I should try to put him back in his smaller tank or if I should I make a water change?… I’m very confused and worried!

I would really appreciate your suggestions!

A:
Moving into a new aquarium can be stressful at first even though it’ll be better in the long run. It is not at all unusual for Bettas show signs of stress including sluggishness, loss of appetite or dull coloration for example. Fish are incredibly in-tuned with their environment and can detect even minor changes in water chemistry, especially pH.

You will want to be sure that the new tank doesn’t have any soap or detergent residue, that the new water has the same parameters as the old (which you have done) and that any necessary water additives have been added. (Dechlorinator if necessary). If these precautions have been taken then it’s likely your fish just needs some time to adjust.

Adding plants (real or silk) and hiding places will help your fish to feel more secure while he gets used to his new territory. Also many aquarists recommend keeping the lights off or surrounding the aquarium with a towel for a day or two to help your Betta feel safe and protected.

I agree that keeping the filter off while your Betta is showing signs of stress is a good idea. Just be careful not to overfeed him during this time and if you detect any ammonia or nitrite you will want to turn on that filter to keep these toxins at bay. Regarding your question about charcoal, I don’t believe it is causing additional stress. Charcoal is generally safe for Bettas but if you are worried you could always remove the cartridge until you are ready to run the filter.

A ten gallon aquarium makes a great home for a Betta. Give it a few days at least to allow your fish to adjust. In most cases they will be back to normal within a week.