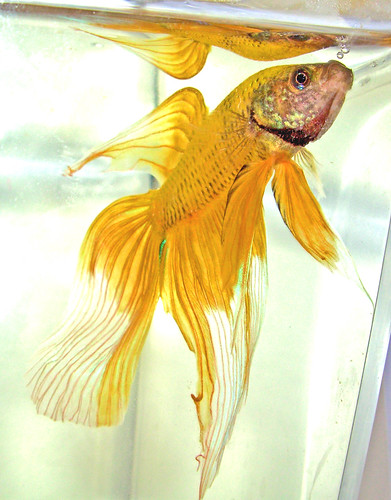 EP Wrote,
Hi Christie! First off, thanks so much for taking the time to read this, it’s a big help!

I bought a betta last Friday, (Davey Jones) and I find he’s been acting strange ever since I got him home. Granted, I do know each individual fish is different, so maybe I’m being paranoid! But since getting him; the first day, I brought him home wrapped in a scarf to keep the water temperature as stable as possible and to help him feel more secure. I acclimated him for about 25-30 minutes, first letting his bag float for around 10 minutes followed by slowly adding aquarium water for about 15 minutes. I admit, getting him into the tank was a bit of an ordeal since I’ve read many times not to get any of the bag water in the tank. In the end, I ended up getting most of it in the tank, but I’ve done several small water changes since then, and a 35% water change today (Tuesday). Basically, the first day he slowly explored his tank and since then he’s been mostly laying on the bottom of the tank or other tank decor, mostly the filter outlet and near a top corner. These have been broken by trips to the top to get air, some moving around, but sometimes when he does move, I feel like he’s moving oddly. It’s these very quick spurts and it sometimes looks as if he’s twitching. I’ll go over his symptoms a bit later, since you have a questionnaire you like to be filled out for detail: so:

1. What is your tank size? 5.5 gallons, heated, filtered, no carbon (a HOB whisper from tetra with a baffle to reduce the current) and cycled (since October)
2. Have you tested for ammonia- what were the results? yes-0
3. Have you tested for nitrite- what were the results?
4. Have you tested for nitrate- what were the results? yes-0
5. Have you tested for pH- what were the results? yes- a steady 7.6
6. What temperature is your tank? 80 degrees F
7. How often do you perform water changes, how much water do you change? A very small water change each day to remove uneaten food, two 10% changes per week followed by a 50% water change each week
8. What water additives are you using (please include any conditioners, salt or medications) I use Hagen’s aqua plus, Seachem Flourish for plants, Seachem flourish excel and Nutrafin Plant Gro.
9. What type of food are you feeding, how often and how much? I’m feeding Hikari bio gold pellets, Nutrafin max medium tropical fish pellets, Hikari micro pellets, Hikari micro wafers, frozen blood worms and frozen brine shrimp. I alternate each food, feeding 3 bio gold pellets, 3 Nutrafin pellets, a tiny pinch of the micro wafers and pellets and 3-4 brine shrimp or bloodworms. I feed one type of food in the morning, another type in the evening and on some days I’ll feed him a little extra in the afternoon. I haven’t decided whether to fast him a day each week yet.
10. What kind of tank mates, when were they added? No tank mates
11. Is your tank planted? Yes, two Anubias nanas, 4 clumps of java fern and 3 clumps of java moss, he also has a half a coconut cut into a cave and a large piece of driftwood.
12. What are the symptoms, when did they begin and is there anything else we should know? Basically, since I’ve had him (less than a week) he’s alternating between lying on the gravel, near the filter and heater to spurts of spastic looking swimming, he does move around and explore his tank, but he seems to spend most of his time hiding, lying on tank decorations and lately he’s taken to sticking himself behind the filter. His caudal and anal fins appear clamped too; he does stretch them out sometimes, but mostly they stay clumped together, his ventral and swimming fins are fine though. I’m worried about this symptom besides it meaning he’s not well, but also I can’t check his fins very well for tears or rot. His breathing seems fine though; his gills aren’t heaving and he has a voracious appetite.

This is my second betta, the first one died of a combination of severe fin rot and something I couldn’t identify. At the time, that betta had been with an apple snail that also died several months later due to a collapsed mantle. The tank had been empty about two weeks before I got this betta, and since then I had done several full water changes.

So I guess my question is whether Davey’s behavior is stress due to new living quarters or an illness. Does it seem like I’m doing anything wrong? I honestly can’t think of anything, I’ve been researching for weeks in preparation for this new fish, since my poor last betta died as a result of my lack of knowledge and I want to be able to confidently take care of a fish. So any information you can give me will be a huge help, thanks so much again!

A: Thanks for providing such a great breakdown of information. There are a couple of things I would suggest. First, bettas love to hide behind their filters because it is one of the only places in the tank with little or no water movement, which they prefer. Unfortunately bettas don’t realize or appreciate that their filters are for their benefit. It is possible that Davey Jones is bothered by the amount of filter current. If your filter has an adjustable outlet, turn the current intensity down to lessen the water movement. If it doesn’t, you can create a baffle that disperses the water movement so it doesn’t feel so strong. In the short term, try turning off your filter completely, just for a couple of hours, to see if you betta comes out to explore. If he does, you can probably assume the problem is the current and you can take steps to fix it. See Heavy Current in Betta Tank for more information.

Rapid darting can also be caused by parasites like Velvet or Ich. Look at your betta closely. Ich is easily seen by the naked eye and looks like small white grains of sugar on your betta’s body. Velvet is much harder to spot and looks like a dusting of very fine gold powder. Velvet can be seen better with a flashlight.

The third, and most likely scenario, is that your betta hasn’t yet adjusted to his new water parameters. It’s possible that there was a significant difference in pH, water hardness, or any number of other factors. It is not uncommon for a betta to take two weeks to fully acclimate to his new aquarium. Bettas that are shipped into local fish stores have often experienced great stress, either through shipping or through neglect at the store. It may be that Davey just needs a little time to heal old illnesses and get comfortable in his amazing new planted aquarium.