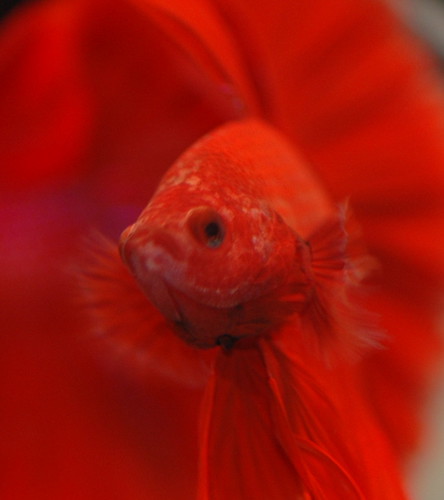 After many days of guessing and hair-pulling, I think I finally figured out what’s been wrong with my little guy. I’m pretty sure he has velvet. I checked for velvet already, last week, but I didn’t see anything. And then, two nights ago, I checked him again with a flashlight just for the hell of it, and I saw a yellowish metallic coloring all over his body. I’ve never had any experience with velvet but I’m assuming that’s what it is. I gave him the recommended dose of CopperSafe two days ago and I’m keeping his tank away from light but I haven’t seen any improvement in him yet. He is still lying on the very bottom of the tank barely moving and his coloring is still very brownish. Fortunately, he never lost his appetite…the little glutton! The CopperSafe box says that one dose of the medication is good for a month. Does that mean I shouldn’t give it to him again for a whole month? Somehow I can’t see that being enough to cure him. Do you recommend a different treatment/product for velvet? And how often should I do the water changes now that we know it’s velvet? Should I be doing them more frequently or will that dilute the medication? As always, thanks for your time!

A: CopperSafe is a potent parasite treatment and when dosed properly can be very effective. Like any fish medication, it has its pros and cons. Your question regarding the dosing of Coppersafe is one that often baffles aquarists and unfortunately hasn’t been addressed by Mardel. (At least not that I have found). The Coppersafe bottle says;

“One application treats water for one month. DO NOT overdose.”

Of course no responsible fish keeper would go an entire month without performing one or several water changes. This begs the question, how often and how much should I re-dose? When you do a partial water change you will remove some of the copper medication with the toss water. Replacing some of the CopperSafe may be necessary to keep the medicine at the therapeutic level. Copper, however, is a very toxic and dangerous material. An overdose can be lethal to your fish. For this reason, conservative fish keepers would caution anyone choosing to use a copper-based medicine to also use a copper water test kit. This is truly the safest way to treat with CopperSafe and ensure you are getting the correct level of medicine. My cautions don’t end here though. Copper is more toxic when present in acidic water. Water is acidic when it has a pH less than 7.0. Water with low carbonate hardness (KH) can also create a risky situation when treated with copper-based medicine. KH (also called buffering capacity) is what keeps your pH stable. When KH is low then your pH is more likely to drop quickly making your water acidic. Again, acidic water makes copper more toxic to fish.

So to recap, I will say this… Copper-based anti-parasite medications, like Mardel’s Coppersafe, can work great under the right conditions. It should be used by fish keepers willing and able to test their water’s pH, KH and copper levels. Since you have treated him already, you may want to run a few water tests and if they come out ok, monitor your fish for improvement over the next several days. On the other hand, if you don’t feel comfortable using copper meds or don’t have the ability or willingness to test your water, you may want to consider an alternative like Kordon Rid Ich Plus 37656 – 16oz. or Aquarium Products’ QuICK Cure which both contain formalin and malachite green as their active ingredients.

If our readers have any experience with copper based medications we’d love to hear your stories. Let us know what has worked for you.