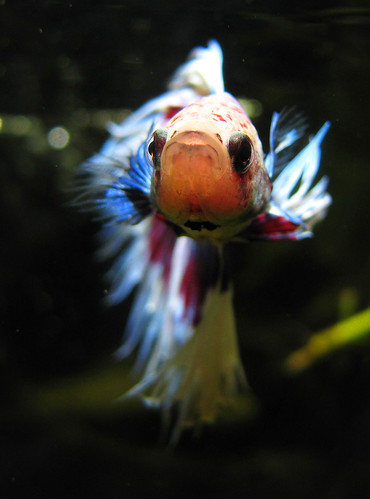 1. Betta fish are lazy and don’t do much.

A healthy betta is an active betta. Bettas constantly explore their surrounding and spend most of their day swimming all around their aquarium. They often respond to their owners by begging for food and wiggling their tails too. If your betta just lays around not doing much, perform the standard water tests checking the ammonia, nitrite, nitrate and pH levels. Make sure the aquarium water is warm enough for your betta. Water that is too cool will slow the cold-blooded bettas’ metabolism down making him more sluggish.

Whether or not you need a heater depends on the ambient air temperature of the room and the likelihood of temperature fluctuations. Bettas are tropical fish and need a warm, stable water temperature of about 78 F (25.5 C). A couple degrees warmer or cooler is fine as long as it is stable. Large fluctuations in temperature can be stressful for fish, which don’t have the ability to regulate their own temperature.

3. You should feed your betta as much as he can eat in 3 minutes.

You can often find this statement in the directions on a package of standard fish food; however, betta fish if given the chance will eat 3 Big Macs, a double side of fries, a chocolate shake and an apple pie in 3 minutes if you give them the chance. Bettas are easy to overfeed and the result is usually a bloated abdomen. The stomach of a betta is about as big as one of his eyeballs. Feed your betta an eyeball-size amount of food one to two times daily. For an adult male betta, that is about 3 or 4 small pellets or bloodworms. Observe your betta for a healthy weight. Bettas constantly overfed will look fat throughout their entire body and underfed bettas will look too thin.

4. Live and frozen fish foods are too rich for daily feeding.

What does this even mean? Too rich? It’s not chocolate cake. In fact, live and frozen fish foods are closer to a betta’s natural diet than factory made pellets or flake food. There are pros and cons to both but there is no evidence that frozen or live fish foods need to be fed sparingly. As long as you offer your betta a variety of live and frozen foods to ensure a balanced diet, these foods can be fed every day if you want.

5. Keeping a betta in a small container makes it feel safe.

Have you ever asked a betta what makes it feel safe? I guarantee it won’t answer you. This myth comes from a misunderstood idea of their natural environment in the rice patties, rivers and shallow streams of Asia. Bettas have a natural adaptation that allow it to breathe in shallow, low-oxygenated water. This does not mean that it’s natural environment consists of just a few cups of water. Many of these shallow areas spread on for miles. They are also a complete ecosystem capable of breaking down fish waste as it is being produced. Keeping a betta in too small of a container puts him at risk for toxic poisoning from his own waste. I have yet to find a container large enough to frighten my betta, but when I do I will certainly let you all know.

Bettas don’t have any special powers that make them impervious to toxins from decaying organic matter (fish waste, food, plant matter, etc.) They are really no different from any other fish in this matter. To be honest, with their thin fragile fins, I think they are more susceptible to environmental stressors than many commonly kept tropical fish. Whether or not you decide to install a filter depends on how you want to handle your maintenance routine. Unfiltered, uncycled tanks will need more water changes and water testing then filtered and cycled tanks.

7. Bettas can’t be kept with other fish because they will fight to the death.