You are here: Home / Behavior / Skittish Betta Fish Too Fightened to Eat 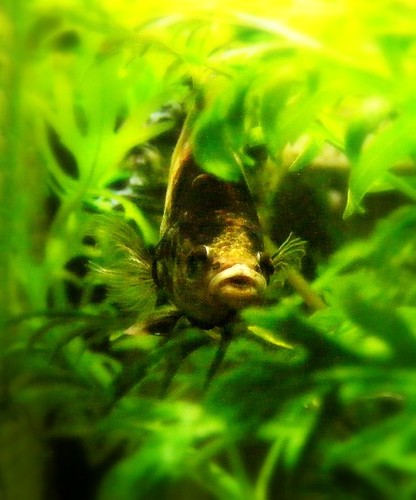 I’m really hoping you can help me. I’ve had bettas before, but I’ve never seen anything like this. I’m at a total loss as to what to do. About a week and a half ago my betta, Billy Pilgrim, began acting like he was very scared of me. He has stopped eating, and anytime I walk up to his tank he goes crazy and swims around really fast until he finds his little cave and hides in it. He lives in a 5 gallon filtered tank. I don’t have a heater because I live in Florida, and his water temperature generally stays between 78 to 80 degrees. I’ve tested his water many times. Nitrates, nitrites, ammonia, and kh are all good. The ph is at 7.8. I did a partial water change, but it didn’t help. He has none of the physical symptoms of any of the typical diseases and seems to be swimming around just fine when I’m not near his tank. I can’t really tell if he’s lethargic because he won’t come out of his cave when I’m in the room. The other day he began flaring at his reflection in the thermometer and began building a bubble nest. I thought these were good signs, but he stopped when I walked by his tank. I’ve only had him for a few months. I’m afraid he’s suffering and slowly starving to death.

A: Some bettas are more skittish than others. It sounds like your betta is fine until he sees you come near and then ducks for cover. This really isn’t anything to worry about as long as he is carrying on normally when he is alone. Flaring and bubblenest building are all good signs that he is healthy. There are a few things you can do to coax him out. First, approach the tank cautiously. Avoid heavy stepping, rapid movements and loud noises around the aquarium until your betta becomes more comfortable. Be consistent with your feeding. When you approach the tank drop a small piece of food in and wait quietly until he comes to retrieve it. If he is too frightened to pick up his food, walk away for 15 to 20 minutes. Come back to make sure he has eaten. If he has not eaten, remove the uneaten food and try again later. If you are worried that he is not eating at all you may have greater luck with live wiggly worms like black worms or blood worms, which you can purchase at many specialty aquarium stores. There is some extra care involved with keeping live foods, but they are hard for bettas to resist. If that is just too gross for you to handle, you may also find better luck feeding your betta frozen fish food. This may be temping enough for your betta to look beyond his fear. Over time, he will make the connection between you and food.

Changing his surrounding may also help him to relax. Adding a few extra plants (real or fake) to his tank and moving the tank to another location may help change the way he sees you when he looks out of his aquarium. It could be that with the lighting and tank location that you look intimidating when you come near. If this is not an option, try feeding him after dark with the room lights off and the tank light on. I have some skittish fish in my marine tank and the only way I can really watch them is after dark. When the room lights are off you can see them but they can’t see you. 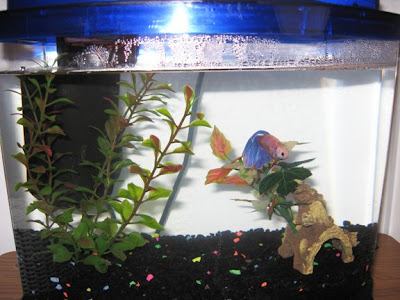