You are here: Home / Behavior / Betta Fish with Lump on his Head 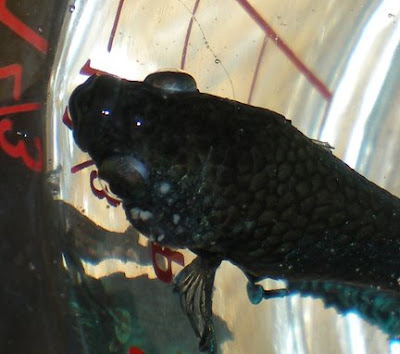 I’ve seen your site and figured I’d get an opinion on my fish if you don’t mind taking the time. I’ve had him since the end of January and about a month after I got him, he had a spot on his face that just grew. I thought it may have just been a scrape but it hasn’t gotten better, just worse. I tried to avoid medications because I’m scared of them doing more harm then good, but the lump on his head just seemed too big and kind of cottony so I treated him for fungus. It didn’t really help much. For the most part he has been on a diet of brine shrimp. He lives in a filtered 5 gallon tank that and I do about an 80% water change every 2 weeks and treat the water with aquarium salt. His appetite is healthy, but I would really like to do something about his problem before it gets too bad. Lately I’ve been trying salt baths, but over the last one, he lost too much colour too quickly. Today (before said salt bath) I had noticed that little white bits were a part of his lump too. I took some pictures, I will enclose the best.A follow up with your opinion would be appreciated. Thank you for your time

(He doesn’t have any other dots on his body, those are just bubbles) he also had a bit of fin rot off and on, but it never got too bad. Right now his fins are in good shape. He a little bit lethargic and has trouble keeping balanced, but he is still enthusiastic.

A: Most betta illnesses can be easily identified but occasionally I get one that really stumps me. The Nippyfish reader above sent in this photo of her betta showing an unusual lump on his head with specs of white. I have speculated that it could be a tumor or perhaps a parasitic infestation of some sort. Despite what you may read on some websites, tumors are not very common among bettas. Most of the time lumps can be attributed to constipation or fluid retention which is commonly misdiagnosed as a tumor. This, however, is neither of those. The white specs are also unusual, which makes me think it could be parasites. Is it possible the lump is filled with some sort of bug which we are seeing poking through the scales? Perhaps gill flukes? It does appear to be near the gills but it is hard to tell if it is an infection of the gills specifically. Could the white we are seeing be the result of slime coat build up from the salt baths? I am just tossing out ideas because truthfully I don’t really know what has caused this. I’d love to hear our readers’ thoughts and ideas as well. Have any of you seen this in your fish?