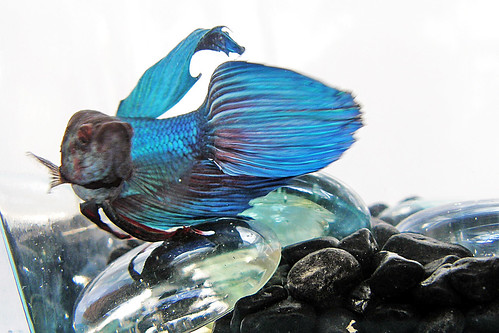 I have had my betta Lapis for a little over a month now, and he’s been through quite an ordeal. About a couple weeks ago he managed to get stuck against the old filter system I had in the tank and ripped his caudal fin to shreds. He’s healing from that, thanks to help from my local mom and pop fish store’s help. Up until Friday he was in a 5 gallon tank, but I had to replace it that morning because the 5 gallon was leaking. He is now in a 10 gallon tank, and this one has a light. I turned it on only for a few moments (honestly don’t use the light, don’t like the idea of algae growth) and noticed for the first time that his face is duller than the rest of his body. There appears to be no signs of ick, velvet, or cotton wool. He’s swimming around like normal, eating normally, so there doesn’t seem to be anything WRONG with him. I read on a website that they sometimes lose their scales due to stress, but that they might heal back. Is that true? Should I start another Melafix treatment? (I was using less than a half dose for a while for his fins; the small amount because I wasn’t sure if he would be allergic or not)Oh, and I forgot to mention he’s now in a 10 gallon hexagonal filled only a little more than halfway. There’s still an adult’s hand-length from the top of the water to the top of the aquarium. I was worried about the water being too deep if I filled it up any more than that. He’s also got a brand new Marineland Visi-therm submersible rated for a 10 gallon tank, and a Hydro-Sponge 1 sponge filtration system (which I put in after the old filter chewed up my poor baby). I live in a dorm-style apartment so unfortunately he’s stuffed in my room, where I’m often moving about. I read somewhere that too much activity might stress him out… should I make a fabric cover for his tank so that he can have quiet times or something? Would that help him de-stress?

I’m including a link to a picture of what I mean about his scales. You can also see how his caudal fin is still a little tattered… it’s amazing that it’s healed so well in just about two weeks. I’m glad I didn’t listen to one of the other betta enthusiasts online because he was pushing the use of antibiotics and saying that Melafix wouldn’t do anything. (I think he was wrong on that one.) This is Lapis Lazuli or “Lapis” for short. I named him that because his coloring often reminds me of the precious stone.

Also, I noticed on your website you suggested that people not add unnecessary chemicals to the tank, yet quite a few betta enthusiasts have recommended API Stress Coat as beneficial to keep the water conditioned for bettas. Should I discontinue using this? I’m on city water and I worry about the chlorine.

A:Thanks for writing in and for sending the link to the photo of Lapis. The good news is I don’t see anything out of the ordinary and your betta, from the photo anyway, looks completely healthy. The dark coloration around his head is very common among bettas and is completely normal, especially for blue betta fish. After bettas adjust to their new surroundings they often begin to show their true colors and most often this means their colors get darker and more saturated. I believe you are just seeing Lapis with his natural and healthy coloration. Even his fins look almost completely healed. You may also find that the light will affect your betta’s coloration. Turning a light on will tell your betta it is time to wake up and hunt. During the day, your betta’s color will darken and become richer. When it is dark they will go to sleep and become pale. While you don’t need a light in your betta tank it is good to make sure he is getting at least ambient room light so that he can maintain his natural rhythm of waking and sleeping.

You can also feel free to fill up that 10 gallon aquarium. While Betta fish may be able to survive in shallow water they by no means require it. It will give him more room to roam and enjoy his surrounding and give you a little more time between water changes. Ten gallon tanks are great for bettas. It’s what I use at home too. You might even get an itch to add a small tankmate or two down the road, which you will be able to do once your tank has cycled.

Oh, and regarding your water conditioner question… A conditioner that neutralizes chlorine, chloramines and heavy metals is absolutely necessary if you water has them. That is something you want to keep using.

Thanks for writing in.