You are here: Home / Behavior / New Betta Fish is Sluggish and Not Eating
Q: H wrote,

Hi there – Firstly, I wanted to say that I’ve been reading your (beautiful) site for a while now, before I bought my first betta, and it helped tremendously – many thanks!

Secondly – I’m hoping you can give me some advice or suggestions. My betta came home on Saturday of last week, with four WCMMs (White Cloud Mountain Minnows), from a really good LFS (all of the fish there are beautiful – well cared for, alert, interested in their surroundings and playful – and the store owner and I spent some time discussing the ailing plakat in the shop’s hospital tank). The betta had been in with a tank full of neon tetras, and had been absolutely unperturbed – they left him alone, and vice versa – so I’d no compunctions in letting them all move into their new home (63 litre Juwel Rekord tank) together. It’s well planted, has an inch or so of gravel substrate and two big chunks of bogwood. For the first three or four days, all was great – they were all as bright and alert as they had been in the shop, and were all eating well. Around Wednesday afternoon, the betta started to display less interest in food. Overnight he became increasingly listless and remains so now.

The tank is fully cycled, and the ammonia and nitrites have both been 0 consistently (I’ve been monitoring it carefully). The nitrates have been high so I’ve done several largish water changes, but the result remains high (40-50). Until Tuesday this didn’t seem to be affecting any of them, so I stuck to water changes, but yesterday I tried adding several doses of Tetra EasyBalance which professes to have nitrate minimizing granules in it. It doesn’t actually seem to be minimizing anything, but I figured it was worth a shot.

I use Seachem Prime as a dechlorinator, but try to avoid too many additives, so it’s just been the Prime and the EasyBalance.

I’ve made sure that the water has been up to temperature by boiling a kettle and adding it to my bucket of tap water, before adding the Prime and adding it to the tank, to ensure no nasties from the hot water pipes infiltrate the tank.

I did a really big water change today, which cleaned out a load of plant debris from a few of the aquatics which haven’t quite made it, and pruned a few others, but the nitrates remain around 25-50 (I’m using the API test strips).

The betta remains listless, hanging out in the foliage near the surface of the water. He’s not eaten since Wednesday, when I tempted him (for the first time) wih a mouthful of Tetra Fresh Delica whole bloodworms “in a nutritious, vitamin-rich jelly”. This was a one off – ordinarily he gets Hikkari pellets or what I assume are freeze-dried bloodworms, courtesy of the LFS, both of which he was eating happily until Wednesday.

His change in demeanor coincides with this meal, but I can’t see any obvious signs of infection (but then, I’m more used to checking for infection in creatures with fur). He almost looks a little “tucked up” (a term I ordinarily associate with horses) – could he be constipated, d’you think? Attached is a pic I’ve just managed to snap as he came out of his foliage for a brief spell.

This is pretty much straight out of the camera – I boosted the exposure slightly to get rid of the shadow on his belly, but his colours haven’t really changed since I got him. I can’t see any spots, light or dark, or discoloration, and I can’t see any sort of damage to his fins, or any bloating, either. He’s really just thoroughly disinterested in everything. The minnows, of course, remain bright and bouncy!

I read your email and looked closely at the photo of your betta that you sent me. From the photo, I can not see anything obviously wrong. On the contrary, his color, size and shape are good and his fins are spread normally. He looks healthy. That said, obviously listlessness and loss of appetite are not normal and you are right to be concerned.

High nitrates over time certainly could be the problem. Test strips are not particularly accurate, but if the actual nitrates are hovering around the 50 ppm mark, like they say, I believe they can be a factor. Unfortunately products claiming to reduce nitrates don’t really work, as you noted yourself. Water changes are truly the best (and most cost effective) means for reducing nitrates. Continue with your frequent water changes until you get them under 20 ppm. Even once they are there, a change in your betta’s behavior may not be immediate.

I am also curious about your water temperature. You mentioned that you heat the water during water changes to match the new water with the tank water, which is great. What is the water temperature typically at and how much does it fluctuate throughout the day/night? Do you have an aquarium heater running? Water that is consistently too cool will certainly lead to sluggishness and even appetite loss as the fish’s metabolism slows down. If possible, run an aquarium heater at around 78F (25.5C).

You may also benefit from testing your water’s pH level. Fluctuating pH or pH that is extremely high or low (alkaline or basic) may lead to similar behavior. If it is normal and consistent it is one more thing you can rule out.

Fish food born illnesses are possible. They tend to be more common when the foods are wild caught or when not properly stored. For example, when frozen foods are left to thaw and then refrozen or are unrefrigerated for longer than they should be. If kept properly, most manufactured products especially brand names like Tetra, are pretty safe.

Hopefully I was able to give you a few things to consider. I know it has been some time since you wrote so if you get a chance, let me know how the little guy is doing. Hopefully he is feeling better. 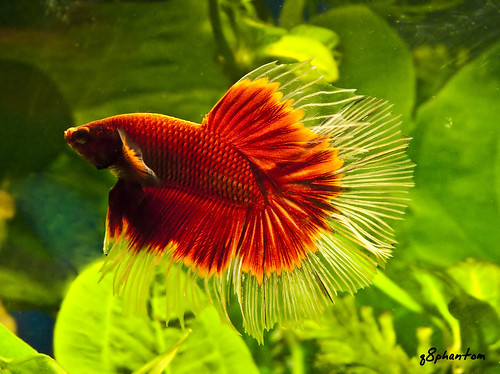