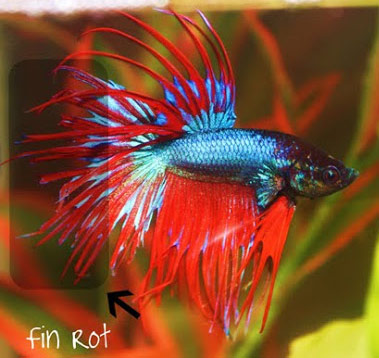 My betta fish Shelbi has fin rot now. His water is and has been pristine with the parameters at their perfect spots. He had blackened tips when I bought him but I thought it was just his coloring. Now his fin tips are damaged and broken. I did water changes and checked his water repeatedly before getting medications to see if he could heal himself but he just got worse and I didn’t want to waste time while his tail dissolved away. I kept him in unmedicated, clean water for a month and a half. When it just kept getting worse, I went to the pet store and bought T.C. Tetracycline and Maracyn-Two. My other fish, Ember had gotten fin rot now, too because I didn’t have another tank to separate him from Shelbi. Ember cleared up almost immediately and I bought a hospital tank for Shelbi. Shelbi has gone through two Tetracycline treatments to no avail. I started Maracyn-Two yesterday and no improvement yet. What else can I do? I have attached a couple pictures of his fin rot. Will his tail grow back the same as it was? Right now it looks very tattered and short and the fin rot is progressing, fast. How long does it take to grow back and regain color?

Also, I went out of town for a week and when I came back, Shelbi had a white speck on him. (it’s actually not really white, it’s kind of gray). It’s not protruding or clumpy or anything, just a white speck, so I don’t think it’s ich. I have also attached a picture of it. What do you think it is?

Poor Shelbi has had a rough time lately, I am trying to do my best to take care of him!

His hospital tank is:
-10 gallons
-heated to 79 degrees
-medium sized gravel
-unfiltered/uncycled
-silk plants and cave
-I clean it once a week
-all perimeters are right

Thank you so much for all of the help you have given me with Ember and Shelbi. It has been so great to have someone like you to go to with questions for a reliable answer. 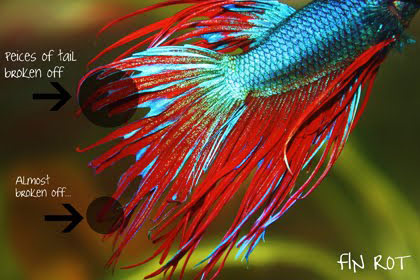 A: Wow, that Shelbi is one beautiful fish. I just love his color.

Fin rot, while not typically life threatening, is still a very tricky illness because it can take a long time to overcome. Torn fins or fins that have been nipped by another fish tend to regrow quickly once the problem has been addressed. Usually within a few days new tissue growth can be seen and significant regrowth can be observed within a few weeks. Fin rot, however, is different as it is characterized as fin tissue loss due to a bacterial infection. It is not uncommon for the regrowth to be much slower or for multiple relapses to occur once new tissue has begun to take hold. Some betta keepers battle fin rot for months before they get a good handle on it.

When the fins do regrow, you may notice some slight differences in color (usually minor) or you could see a curling of the rays, especially in crowntails. This curl is usually permanent and while it may not win any awards for your fish, it will not affect him in any other way.

Fortunately, based on your photos, Shelbi’s fin rot is very minor and your hospital tank set up seems like a good healing environment. You may find, once he is finished with this course of antibiotics, that you can continue to monitor him in his usual aquarium.

Things to watch out for while he is mending:
1. Any ammonia or nitrite in the water
2. Fluctuating pH
3. Organic debris collecting where the fish may drag his tail
4. Water that is too cool or fluctuates greatly
5. Tank décor or other fish that may tear his fragile fins

If you find that his fin rot continues to worsen you may need to dig a little deeper into the cause. For example, how is your tap water treated? Are you using a water conditioner that neutralizes chloramines and heavy metals as well as chlorine? Are there other stressors that could be creating a hazard? What is your pH level from the tap as well as in the aquarium? If it is fluctuating, have you tested your carbonate hardness (KH)? It might be that we just need to take a closer look at some of the other water parameters.

You can always email me the results of your water tests and I can look them over too to see if there is anything unusual or missing from your test regimen. Let us know how he is doing. Hopefully he is responding to the Maracyn-Two treatment.

The white spec is another story. It is really difficult for me to see what is going on there. It could be the early signs of a fungus-looking bacterial infection or an actual fungus. I did see a case recently where the betta was loosing pigment and his scales around his head were turning white (not raised or fuzzy). It wasn’t anything I had seen before but would be curious if you think it is the same thing. Does it look like the scales themselves are changing color or falling out? 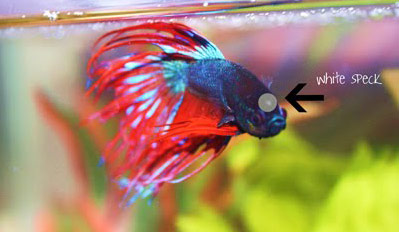