Hello! I have found so much useful information from your site. Thank you for all of the time and hard work that you put into it!I have had this little guy for two weeks. He was in a small bowl, that I did water changes on every 2 days. When I bought him his tail already had a “fringe-y” look to it, but did not seem to be anything wrong to me. He eats good, and has been acting healthy. I did damage his tail while moving him to clean his bowl, 🙁 It was a rookie mistake, and it looks like someone to a bite out of it. “net happens” is now our slogan…

Two days ago, I got him moved into a 6 gal eclipse tank. He LOVES it! I didn’t know bettas were such active fish. He has been playing in the current, and just having a great time. My question is that I am worried about his tail….is it getting fin rot? or am I just being an over protective mother?

I have been using stability everyday to build up the good bacteria in the tank. (It says to use it for the first 7 days) I also used Prime, and 1/4 teaspoon of aquarium salt. I tested the water today. PH 6.8. Nitrite 0, Nitrate 0, Ammonia 0. Tank temp is holding steady a 79 degrees. Right now all I have are a few silk plants, and gravel. I want to do a planted tank later. I have not done a water change yet, will do so when ammonia levels rise. He is getting pellet food, 3 to 4 pieces everyday, and freeze dried blood worms a couple times a week. At this time he is the only fish in the tank.

The only other thing I can think to add, is that he only flairs on one side. It looks like a deformity. When he sees himself in the mirror, he gets all “puffed -up” and flairs, but only his right side opens up. Have you ever heard of this before?? It doesn’t seen to bother him, and he acts normal…so I figured birth defect. 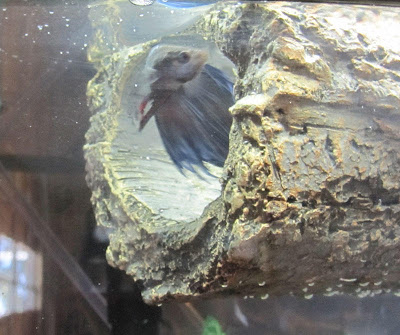 DA’s Betta Fish
A: Wow, D, your new 6 gallon tank set up sounds great and your water parameters are spot on for your betta fish. For a “rookie” as you called yourself, you are certainly on track for success.

Thanks too, for sending the photos of your betta fish. I can see exactly where you clipped his fin with your net. The good news is I don’t think it is turning into fin rot. On the contrary, it appears he is growing some new fin tissue. In the photo below you can see some very fine cellophane-like webbing beginning to grow where he lost the chunk of fin. That is new growth. It will likely take a couple of months before he has his fin completely healed but as long as you keep his water clean and your betta healthy, you should notice rapid improvements in the next couple of weeks. 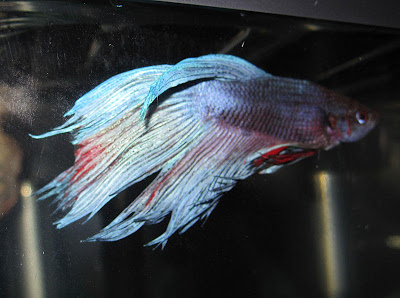 Betta fish tail fin regrowth
Of course, I should mention that new fin tissue is extremely fragile. It is not unusual for bettas to lose their new fin growth due to reinjury or fin rot. Be gentile with that net during water changes and keep his water warm, clean and stable. 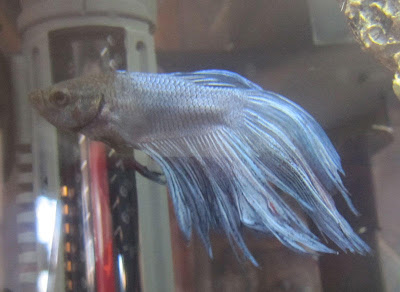