All fish, including bettas, are sensitive to changes in their environment. Even subtle changes in water chemistry can stress your betta enough that he’ll stop eating. This is most common when you first bring your betta fish home from the store or breeder. It can take several days or more for your betta to acclimate to his new home and he may eat sparsely or not at all while he adapts to his new surroundings. Even if his new tank is larger and cleaner than the store cup, time is still required for him to adjust to his home.

Some bettas will refuse to eat new foods when they are introduced. Some bettas are picky eaters and prefer one food type over another, but more often the fish simply don’t recognize the new offering as food. Betta breeders, for example, will often feed their juvenile bettas a combination of live and frozen foods to ensure they are getting nutritious, high-quality food that aids in rapid growth. When you then offer your new betta pellet or fish flakes, he may avoid eating or spit out the food not recognizing it as food at all.

Betta pellets and flakes look and taste very different from their live or frozen counterparts. Offer your betta a variety of foods to get him used to trying new things. If your betta won’t eat a particular type of food, remove it from the tank after 10 minutes and try again later. Continue trying to feed that food over several days. If he still won’t eat it after three days, try something else. Most betta fish love foods that are close to what they would eat in the wild and very few will refuse live worms or larvae. If you are too squeamish to feed your betta live foods, or if they aren’t available at your local fish store, frozen is next best thing.

Bettas are cold blooded animals whose metabolism is directly influenced by the ambient water temperature around them. Betta splendens, being tropical fish, require their water temperature to be stable somewhere between 76°F – 80°F (24.4°C – 26.6°C) Bettas kept in warm water metabolize their food faster and need to eat more often to keep their energy up. When bettas are kept in cooler water, their metabolism slows and they require less to eat. Bettas kept in unheated tanks may eat less than bettas kept in heated aquariums.

Appetite loss is a common symptom of many betta fish diseases. If your betta suddenly stops eating, first test your water to see if there has been a change in his water parameters. Next, observe him closely for other signs of illness such as color loss, lethargy, clamped fins, bloating, swelling, open soars, ripped or bloody fins, parasites, fungus or any other symptom that may be out of the ordinary for your betta. Since the average betta keeper doesn’t have the tools to test their betta for disease, diagnosis is usually made by testing the water and observing symptoms. If you suspect your betta is sick, it will be necessary to fix the cause (often environmental stressors) and possibly the disease too before he will accept food again. 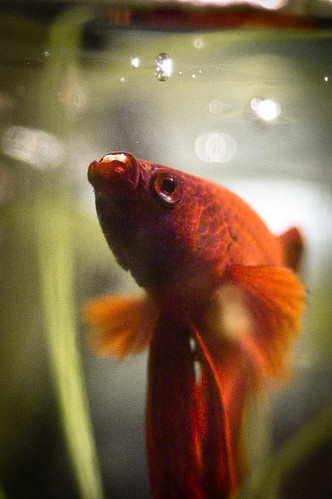