The use of garlic as a medicinal aid has been popping up all over internet fish forums since 2009. Betta fish and discus owners in particular have been receptive and have touted its benefits for treating anything from appetite loss to blindness and everything in between. When I start seeing a new remedy gain in popularity without any scientific back-up (even loosely scientific), I have to ask the question: Where did this rumor get started? And more importantly, Does it work?

Internet aquarium forums are a wonderful way to gain knowledge about our hobby, share our mistakes, and get help at a moment’s notice. The down side is, much like the game Operator, facts move quickly from person to person – forum to forum, changing just a little until the original truth is all but lost. Starting with Google, I began to walk back in time to find the origins of treating fish with garlic.

It turns out that 2009 and 2010 were popular years for treating betta fish, in particular with garlic remedies. There were lots of questions about HOW to prepare garlic for your fish, but not a ton of information about why one would want to do so. Nearly all the fish care sites I found were focusing on preparing fresh garlic, direct from the clove. A high school student on Wiki Answers warned fish keepers that garlic should not be fed directly to bettas, but rather the juice should be squeezed out and used as a wash on frozen peas (a vegetable popular for treating constipation in betta fish). This fish keeper recommended it as an antioxidant and an appetite stimulant. Around the same time, Bettafish.com contributers were addressing rumors that garlic could cure fin rot. The consensus was that it could not directly, but when juiced and applied to betta food, could help improve immune system function. A few months before that there were claims that it could treat “internal and external problems“, however those problems weren’t specified. A different method for administering garlic to betta fish was recommended, which didn’t include food at all but rather sprinkling garlic powder directly into the aquarium. Meanwhile, at Fishlore.com, tropical fish hobbiests were using garlic to flush out and kill parasites from guppies and otocinclus catfish. One contributer shared that using garlic as a preventative tonic meant that parasites could not take hold.

From 2000 – 2008 there was very little online discussion about the use of garlic as a natural remedy for treating tropical fish. There were a few sporadic references to Seachems Garlic Guard, which is marketed as an Appetite and Flavor Enhancer for both freshwater and marine fish. For the first time, the Seachem product referenced garlic oil, rather than smashed up cloves, minced, or powdered garlic. This was the first I read about treating fish with garlic that had an air of legitimacy. Oils are more stable and predictable and calculating dosing would be a lot more accurate when dealing with an oil. Even so, the product was not advertised as a medicine, but rather a supplement. The popular online fish store, Drs. Foster & Smith elaborated that Garlic Guard contains the active ingredient allicin, which contains powerful antioxidant properties that can lessen free radical damage to cells. Of course they were careful to say that it can lessen free radicals, not that it does. Very few supplements are thoroughly tested in humans, I have to doubt that much is done with aquarium fish. Regarding its affects treating parasites, Seachem specifically states in their directions for Garlic Guard that it should be used with other Seachem products: “For enhanced effectiveness against Ich and other parasites use Seachem’s Focus and Metronidazole as follows: Add 1 measure of Metronidazole to 1 measure of Focus per tablespoon of frozen food. Completely soak this food mix in Garlic Guard, refrigerate, and feed once or twice daily for 1-2 weeks.” 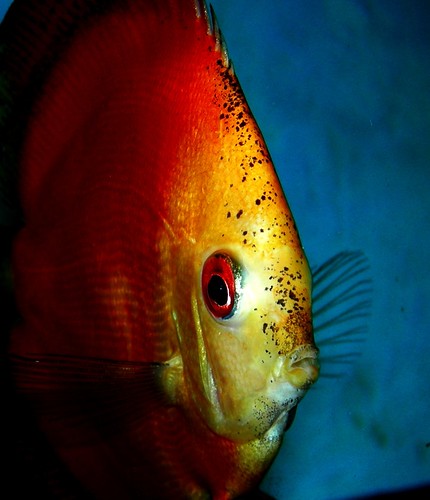 Still unable to locate the origins of the rumor, I dug back deeper still, until I came across an article by the respected discus breeder, Jack Wattley in the May 1999 issue of Tropical Fish Hobbiest. In that one little article I was able to attribute most of the origins of the garlic rumor AND got to read about the quasi-scientific study he performed with garlic. I was in heaven.

The gist of it was this: Jack Wattley and Terry Fairfield soaked discus food in oil taken from garlic capsules and fed them to fish known to be infected with internal parasites. After 6 weeks treating food at every meal, there was a drop in the number of parasites found. (Ah ha! the origins of the garlic to treat parasites rumor) The article also mentioned that the discus ate all the food. Another version of the article online said they ate it “eagerly“, which may have contributed to the belief that garlic is an appetite enhancer in tropical fish.

Wattley and Fairfield also tried feeding their discus fresh garlic puree squeezed directly from the clove. Again, this may answer why this method has become so popular with betta fish owners. While Wattley found this method inconvenient, it did produce interesting results. The parasitic worms did not die when they came in contact with the garlic, however, the fish did have noticeably fewer parasites when treated at every meal for a course of 5 weeks. Wattley also conjectured in this article that the garlic method was safe for the fish and caused fewer problems when used repetitively than fish parasite medications.

In Wattley’s article he mentioned giving talks about garlic as fish medication years before the 1999 TFH article had been written, which suggests that others may have been trying the remedies too. He never mentioned where he learned of it or if the idea was one he had on his own. He did encourage others to try it and record their results. I was hesitant at first to recommend it as I am well aware that garlic is toxic to many animals, including dogs, cats and birds. After digging a little deeper it seems many have tried it, and while results are mixed, I haven’t yet read of any fish being harmed or killed when administered a conservative dose of garlic. I guess I have to agree with Jack.

Try it. See what happens and for God’s sake, report back. The only way we’re going to know exactly what it treats, if it works and how it works is by giving it a try.

Jack Wattley’s full Tropcial Fish Hobbiest article has been posted online. To get the details of his experiments and experience visit Discusnews.com.