You are here: Home / Betta splendens / Preparing and Feeding Blackworms to Tropical Fish

California Blackworms (Lumbriculus Variegatus), most commonly referred to as just blackworms, are a popular tropical fish food. In addition to feeding them to my betta fish, I have used them as the primary food for my Dwarf Puffers and Gouramis. These worms are fed live and while they can be impossible to find at large chain pet stores like PetCo and Petsmart, they are often sold at smaller private fish stores or purchased online. 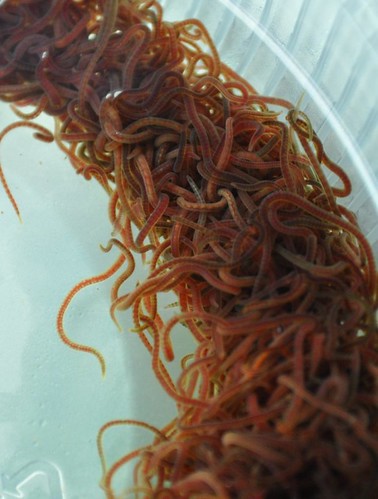 Feeding blackworms is easy. For small Betta or Dwarf Puffer aquariums where there are usually just one or a few fish at most, worms can simply be dropped in front of the fish with tweezers or a pair of forceps one at a time. For large community tanks, a feeding cone can be filled with a bundle of blackworms and fastened to the glass with a suction cup. They will stick their heads through the slats in the cone and will be plucked out by fish. Bottom dwellers and skittish fish who won’t compete with more aggressive fish for food should be hand fed using the tweezer or forceps.

Blackworms are a wonderful food for your fish and are a great choice for fish keepers who don’t want a lot of hassle.