You are here: Home / Betta splendens / Betta Fish For Sale | Where to Buy Bettas

So you need to know where to buy Betta Fish. Fortunately, bettas are easy to come by if you’re not too picky about the color or fin type you are looking for. Just about every fish store and general pet store has rows of colorful bettas for sale.

Years ago the only betta fish available at most fish stores were male, veil-tail bettas. Around 2004 female bettas began to grow in popularity and became more prevalent in U.S. pet stores. Customers began to recognize that while they had shorter fins, their color and personality were as vibrant and varied as their male counterparts. Within a year stores began to sell a proliferation of various fin-types too. More breeders were producing double-tail and crowntail bettas and selling them at the big box pet stores like PetCo and PetSmart. Today, those same stores continue to sell a variety of betta types which now include delta and halfmoon bettas in some areas.

Even the retail giant Walmart got in on the betta buzz, selling their betta fish for less than a Starbucks Frappuccino. While Walmart has come under fire by some betta fish enthusiasts for keeping sick fish in dirty water, surely they have earned much of the credit for ensnaring people into the hobby. I can only imagine the thousands of Walmart shoppers who mosey by the aquarium department only to end up with a new betta in their basket. As we all know, bettas are like potato chips: you can’t have just one. Walmart is to blame, at least in part, for chronic betta fish addictions throughout the U.S.

For those who are willing to spend a few more bucks, they can often find some really interesting betta fish at their local fish store. Many of these stores get first dibs on the best locally bred bettas and thus have more rare and more healthy fish for sale. Here in Southern California, big box store bettas may range from $3 – $7, while the local fish store sell theirs for $12 – $25. Obviously, more exotic bettas can go for quite a lot more. My LFS has some wild bettas for over $150. While they may actually be F1 bred from wild parents or F2, the cost reflects the rarity.

For betta enthusiasts who know exactly what they want right down to the sex, color, fin and patterning type, the only option is the internet. There are a variety of reputable betta breeders selling their stock directly on the web. Most breeders specialize in a couple of strains in particular. Some careful searching may be needed, and there can be a significant wait-time depending on the specifics you want. The IBC (International Betta Congress) is a wonderful resource not only for breeders but for keepers who need to connect with breeders. For betta enthusiasts who are interested in wild betta conservation, the IBC hosts the Species Maintenance Program, which focuses on preserving wild betta species and assisting betta keepers in caring for wild bettas bred in captivity.

Aquabid is one of the most popular methods for buying bettas online. Aquabid is an online auction site, very much like Ebay, that deals strictly in live fish and aquaria. Their betta pages are extensive and some of the world’s most accomplished breeders sell their fish there. Just about any kind of betta fish you can think of can be found on Aquabid and it is a great resource for learning what new strains are being developed. Just today I found a Red Dragon Platinum Halfmoon Plakat and a Mustard Gold Salamander Butterfly Super Delta – I don’t even know what all that means but it sounds beautiful! Most Aquabid bettas are sold for about $20 U.S. dollars. This is a great resource for breeders as well as many sellers offer breeding pairs or entire lots of bettas for very reasonable prices.

There are many options available for every type of betta fish enthusiast. Ultimately, it’s their personalities that win us over so whether it’s a $3 betta from Walmart of a $220 Wild Betta Macrostoma from an Aquabid auction, get out there and choose the betta for you. They will wiggle their way into your heart and you will never regret it. 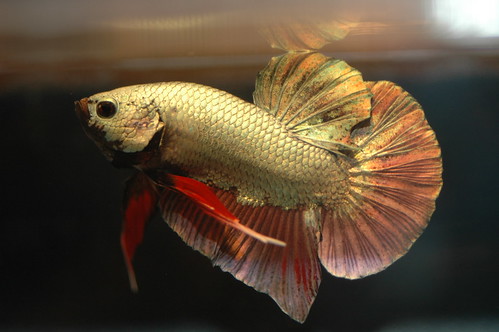 Joep’s Fish on Holiday with me, originally uploaded by Daniella Vereeken.