You are here: Home / Behavior / Appetite Loss / Are You Feeding Your Betta Enough?

We often talk about the dangers of overfeeding your betta fish here at Nippyfish.net but today I wanted to address the common problem of underfeeding your betta. With the proliferation of betta blogs and online web forums sharing betta care information with the masses, sometimes the important messages get lost. Stories of Swim Bladder Disorder and abdominal bloating are in no short supply and the culprit is often overfeeding. With all these internet warnings and tales of caution there seems to be an influx of betta hobbyists who are now terrified to feed their fish.

When fish keepers write into Nippyfish.net with questions about their sick betta, I will often ask follow-up questions about their betta’s habitat and diet. Some of the feeding regimens I hear about amaze me. “I feed my betta 3 pellets and a blood worm for treat once per week.” “I feed my betta one pellet in the morning and one in the afternoon and a half a blanched pea on the weekend.” This one never ceases to surprise me, “I cut a pellet in half and…” I can’t believe how many betta keepers are cutting pellets in half. It’s amazing. I have absolutely no idea how I would even begin to cut one of those little betta pellets in half. The only thing that could possibly be left is a puff of dust.

First let me say this: Yes, betta fish are little piggies who, if given the chance, will eat until they are fat and bloated. This is because they are programmed to eat when food is available. They don’t know when the next little mosquito larvae will wiggle their way on by. Any book or website that tells you to feed your betta whatever he can eat in 2, 3 or 5 minutes (the advice varies) has probably never owned a Siamese Fighting Fish. You’d be shocked at what a hungry betta can put down in 2 minutes.

That said, a few pellets per week or even 2 per day is not a sustainable diet. Most betta fish care websites (including this one) will recommend you feed your betta an amount equal to the size of his eyeball, twice per day. This has usually been pretty solid advice because it means a smaller sized betta will eat less than a full grown betta. The problem with this advice, however, is that people still have a hard time gauging how much to feed. “Is it a portion the size of the visible eyeball or the entire eyeball?”

Now I’m going to tell you, against all the advice I’ve ever given, to throw away the rule of thumb… and…

Use your best judgment.

Bang, there it is!

I know, using your judgment can be such a letdown when you came to this site so someone could tell you what to do. Let me explain, this time, from my own experience.

Think of bettas like tiny people. What works for one doesn’t necessarily work for all. My bettas, for the most part, have had a pretty good appetite and I rarely experience the bloating and SBD problems that plague other aquarists. For a grown healthy betta I might offer him a couple of Hikari BioGold pellets in the morning. BioGold are small and hard and don’t swell as much as Betta Bites when wet. I watch the betta to see if he wants more. If he does I might give him another two or three so long as he is eating eagerly and his stomach is not distending significantly. That evening, any expansion in his abdomen from the morning’s feeding should have gone down. Now, I might feed him live blackworms.

If I’m bothering to buy blackworms I usually try to give them at least a few per betta. Three or four medium sized blackworms equal quite a bit more than the one eyeball-sized portion recommended, but as long as he is eating and not swelling significantly the portion is fine. In the morning I check him again to make sure the food has passed and he is not constipated and bloated. The next day I might switch to some frozen food. I offer 3 or 4 bloodworms in the morning and the blackworms again in the evening. Over the course of several months I observe my betta’s weight. Betta fish can become overweight but it is not common and often not easy to recognize.

More often, overfeeding causes other health problems like bloated abdomen or Swim Bladder Disorder. Underfeeding, however, will result in a bony, colorless betta with concaved sides and little or no fat storage near the tail. They will often clamp their fins and have a body that is very tapered (large near the abdomen where the organs are located and too thin near the caudal peduncle.) An inadequate diet or malnutrition can lead to a weakened immune system and inability to fight off common diseases. Common sense says, “a well fed betta will be healthier than a half-starved one.”

If I have any advice here it is not to get too obsessed withholding food from your betta out of fear. Healthy bettas like to eat and will eat. If you happen to have a fish that has digestive problems and is bloating after meals or having problems staying neutrally buoyant after meals (turns vertically in the water or head drops down or turns up out of control) then it may be a good idea to review the quantity you feed and make some dietary changes. Don’t go crazy (20 pellets is TOO MUCH) but if he isn’t having any problems with his diet and has a strong appetite, then let him eat. The key is observation. Don’t feed him until he swells out of control and watch his growth over several months. 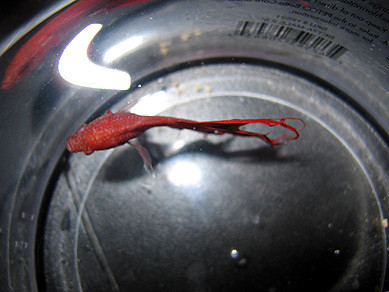