You are here: Home / Betta splendens / Fin Blow Out

A “blow-out” is a term betta breeders and hobbyists use to describe a small hole or tear in the fin tissue caused by spreading or “flaring” of the fins. Torn or frayed fins can be caused by a number of things including bacterial fin rot, injury from tank décor, biting from other fish or even from a betta nipping his own fins. The term blow-out is not used when holes or tearing are the result of anything other than tension in the tissue caused by flaring.

While blown-out fins are usually blamed on excessive flaring there are other likely factors that contribute to the tearing including genetics (large fins with thin tissue) and water parameters. Bettas predisposed to bacterial fin rot may have more blow-outs due to the degradation of fin tissue. Again, poor water quality is not the sole cause of fin rot, but merely a contributing factor in some cases.
The most common type of fin-blow out is a “pin-hole”. This is a tiny puncture that occurs where the tissue is stretched the thinnest. They are very commonly seen in the dorsal and anal fins. Pin-holes are very minor tears and usually require no special treatment. They typically heal naturally within a couple of days.

Holes larger than a pin hole can be treated simply with clean water. For severe blow-outs, API’s antiseptic BettaFix has proven to be very effective in reducing the healing time. Follow the manufacturer’s dosing recommendations carefully. If you are noticing frequent blow-outs or thinning of the fin tissue and suspect that it may be the precursor to bacterial fin rot, begin by testing your water parameters and increasing your water changes. If fin rot does develop treat with an appropriate antibiotic rather than BettaFix.

Blown-out fins are common and are generally considered a cosmetic problem rather than a serious health risk. Most heal themselves in just a few days. If you are worried that your betta is flaring too much and his flaring is causing his blow-outs, check out our Tips for Hiding Your Betta’s Reflection. 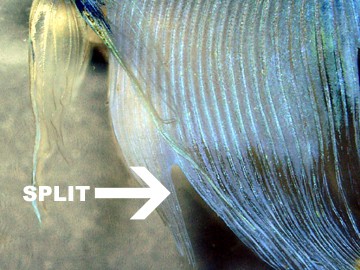