This is the story of Lucky, that I sent to a betta list many years ago, when I was a complete newbie. This is a horrifying account of what happens when the peace lily vase with a betta is sold to unsuspecting people…

“On Monday a colleague brought a vase with a peace lily to my office and said, “I think my fish is dying!” It was given to him as gift 5 weeks ago and the instructions were not to feed the fish or do anything with the water, and that is exactly what he did… nothing.

I couldn’t believe the horrible condition this betta was in. His body was entirely white, except an orangish color, which covered the dorsal part of his body. His body was completely emaciated, just horribly skinny and almost contracted. He was lying on the bottom of the vase and I only saw him struggle once to get to the surface for air. The only fins that he had the strength to move were his ventral ones. The other fins were stuck together and laid flat and useless. Both eyes looked huge. I felt so sad for this betta.

My second thought (which came 10 seconds later) can’t kill the fish, it’s not in my nature or training.

I am a new betta mom myself and only for about 6 weeks, so I need your advice on what I should do…

So, I’m thinking with this fish that he’s got a number of big problems… horrid water conditions, fin rot, popeye and ????velvet (what is that orangish color on his back?). No “grains of salt” seen. Also not swollen as in dropsy.

I immediately did a 50% water change with aged water that I always have on hand with NovAqua, Amquel and Aquarium Salt. I was afraid to do a 100% change, as I thought the difference might be too shocking for him. I threw in some FD bloodworms and as the co-worker was taking him away, he named him, “Lucky”… as in he’ll be lucky to make it through the night. I got a call a couple hours later that Lucky was swimming around a bit and had eaten the bloodworms (no kidding… I guess he is a little hungry after 5 weeks…geez!).

I asked the co-worker to leave Lucky with me for a while, so he dropped him off today. This fish looks kind of scary to me… big eyes and skinny pale body and contracted fins… sort of like he’s dead. I did a 100% water change today and added NovAqua 1cc, Amquel 1cc, huge pinch of salt and 1cc of Rid-Ich, basically everything I have on hand in my office. Before I put him back in the vase, he ate FD brine shrimp and FD bloodworms. When I put him back in the vase, which I estimate to be 1.5-2.0 gallons, he just floated for about 60 seconds, not moving anything but his gills… I thought…I’ve killed him with clean water!! Then he just perked up and started swimming around the bowl, even trying to use his stuck-together fins! Amazing what a change in water chem can accomplish!

Looks like he may live and I can tell that he once had long beautiful flowing blue fins with red tips. So… what should I do for Lucky now to heal him???? ”

Lucky, a sweet Cambodian, survived and the owner gave him to me to keep! 🙂 He went on to live another 14 months in a luxurious 5-gallon hex. Lucky died from an abdominal tumor, though his passing was peaceful. And the plant? Well, it is now about 6 years later, and that peace lily plant continues to live in my office, planted in soil, and every once in a while, it graces me with a beautiful lily and I am reminded of Lucky. And me? I’ve come a long, long way in understanding how to care for bettas! 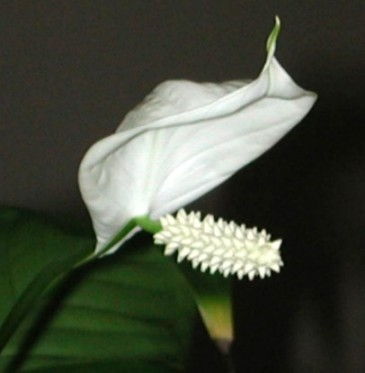 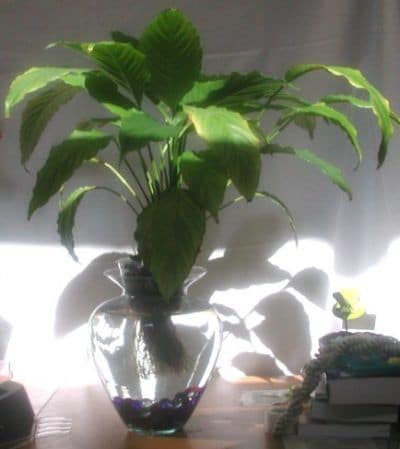 So, can you keep a betta healthy in a peace lily vase?

I will say up front that I am not an advocate of this set up, as typically the vases that are used are way too small and the instructions passed along for the care of the betta, are incorrect. That said, it can be done properly.

First, the vase must be at least a one-gallon size (and a two-gallon vase is even better!) as anything smaller leads to a quicker decline in water quality and does not allow the betta enough room to swim. It is a myth that the betta prefers to be kept in small, cramped quarters. Likewise, be sure that the bottom one half of the roots are cut off so that he has ample swimming room within the vase.

Next, insert a straw in an inconspicuous spot between the plastic cup holding the plant and the vase to allow air to exchange between the outside and the inside of the vase. This is important because a betta breathes atmospheric air, with a special organ called the labyrinth organ, at the water’s surface. If the cup is lifted up daily when feeding your betta, then this will replenish the space between the water’s surface and the cup with fresh air, making the straw unnecessary. Also, the roots must never be so thick upon the surface of the water that the betta cannot reach his way to the surface to take a “gulp” (breath) of air or he will drown. 🙁

Your betta must be fed with foods appropriate for bettas. It is a myth that the betta will live off the roots of the peace lily or any other plant. It is true enough that if you starve your betta by not feeding him properly, that he may resort to eating the roots. However, he is a carnivore (meat-eater), so eating the plant roots will not sustain him for long. It can take a betta 1-2 months or even longer to starve to death, so if you think that your betta is doing just fine after not being fed for one month, take a minute to reconsider his situation. The betta, like all creatures, deserve to be fed properly and if they aren’t, then their lives will be shortened. A betta should live on average for two years and many live quite a bit longer.

It is a myth that the plant cleanses the water of all the betta’s waste, making water changes unnecessary. Your betta needs clean “conditioned” water of an appropriate temperature on a regular basis. Please, check out how to perform water changes with a betta.

Please help our little finned friends from such tortures as starvation and filthy water and share this information with someone who owns or makes the betta with a peace lily set-up. Thank you for wanting to learn more about how to properly care for a betta!