You are here: Home / Experience / Fearless Steinem Builds a Nest!

We all know that it is the male betta, who builds the great bubblenest in high hopes that a lovely lady betta will by chance happen along, so that he can embrace her! During the embrace, he wraps himself around her to trigger the release of her eggs. He then rushes around quickly, gathering the eggs up into his mouth and then blows them into the nest, where they are safely tucked away. The daddy-to-be lavishes the eggs and the newly hatched fry with great care and protection. Well, move over Mr. Betta because Fearless (aka Ms. Fearless Steinem!) is on the move and she is living proof that females can do anything that a male can do! Well, almost anything! 😉

Fearless lives alone in a 2.5 gallon bowl. Her single male and female neighbors can see each other through the greenery between their bowls and though she has never spawned, this inexperience didn’t seem to stop her! Over a span of 3-4 days, she filled up with eggs (normal enough), built her own bubblenest (say what??!!) and then dropped (released) and gathered her own eggs, tucked them safely into her nest and stood a watchful guard!! I almost expected to see them hatch, seeing as she was being such a good father! 😉

After two more days, Fearless lost interest in the whole process and began to eat the eggs. She must have developed a taste for caviar during this time because now, when she drops her eggs, she can’t eat them fast enough! I have to watch her closely, so that when she drops her eggs, I can beat her to as many of them as I can before she has a chance to eat them all! Overeating like this might cause her to have constipation, which can be a serious problem in a betta.

The following are images from Fearless’ first experience as a fishy feminist… enjoy!! 🙂

The lovely lady Fearless is normally sveldt and her vanity is showing as she checks out her reflection in the side of her bowl! 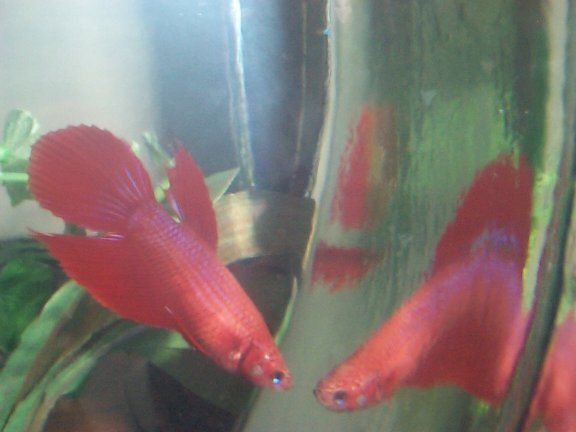 A close up of her showing her splendid tail colors as well as her oviposter (or egg tube), which looks like a white dot and enlarges when she begins to fill with eggs. 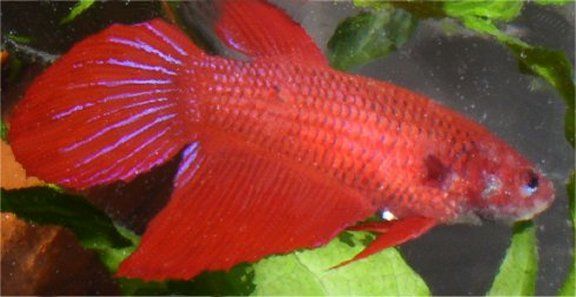 Fearless has gained a little weight as you can see by how deep the front area of her body underneath (belly) has become, but those blue eyes still hold their magic at how lovely she is! 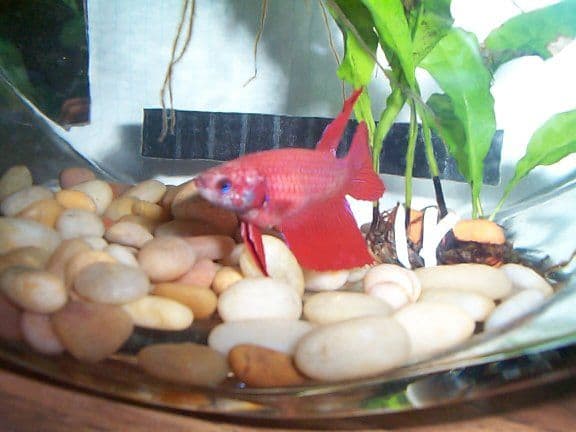 She now also begins to build her very own bubblenest! This nest outdid many of the ones created by her neighboring male bettas and only took her one day to manufacture. 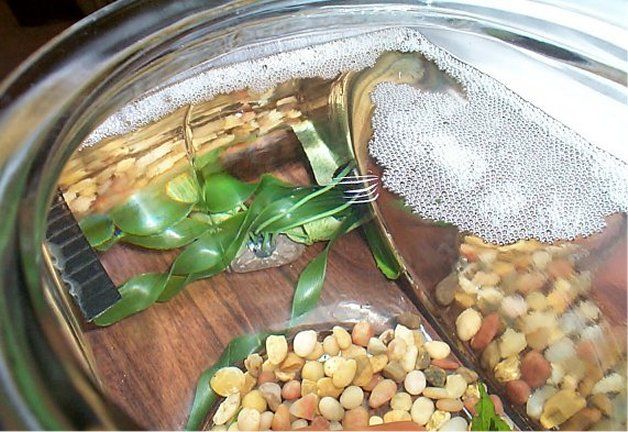 Fearless is becoming larger and more round in the belly area as she fills with eggs. She noses her way through the rocks hoping to find a leftover morsel from dinner. 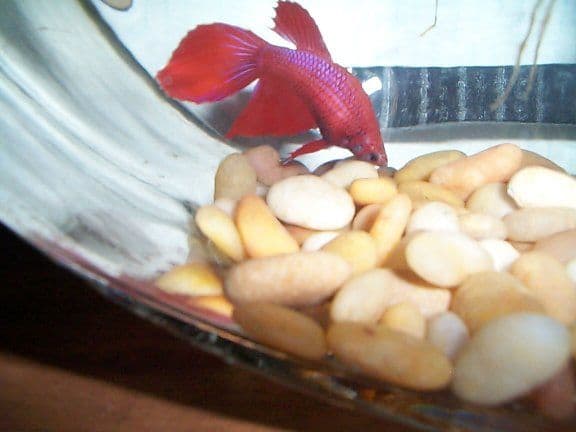 Her scales expand over the belly as she becomes more round with eggs and her oviposter begins to extend, looking like a little white tube. 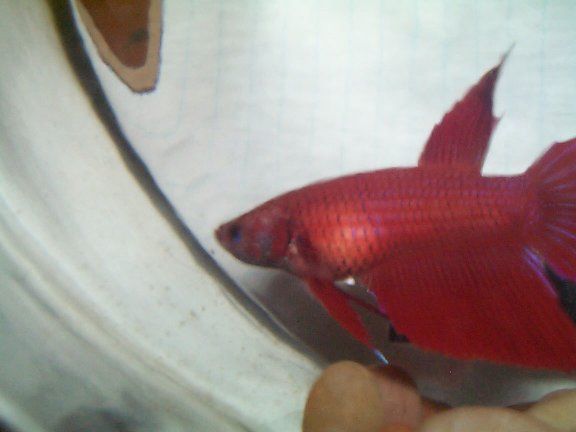 As Fearless works diligently on her bubblenest, she now looks as if she has swallowed a marble! 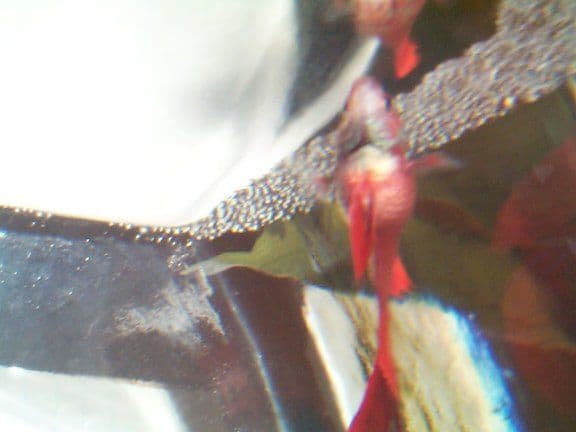 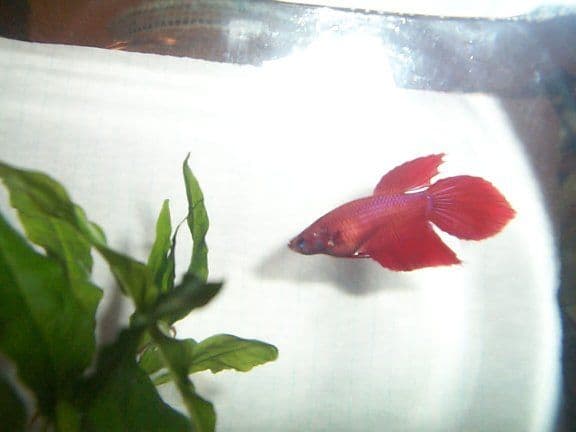 So… who needs a male around when there’s eggs to be gathered and cared for?! Not Fearless!! She would swim close to the surface of the water and release a few eggs through her egg tube and then race down to catch them all in her mouth and then back up to the nest she went, where she tucked them lovingly in! 🙂 She repeated the process many times over. Then, she fiercely guarded those eggs, not even eating herself and flared at anything that came near her, myself included! 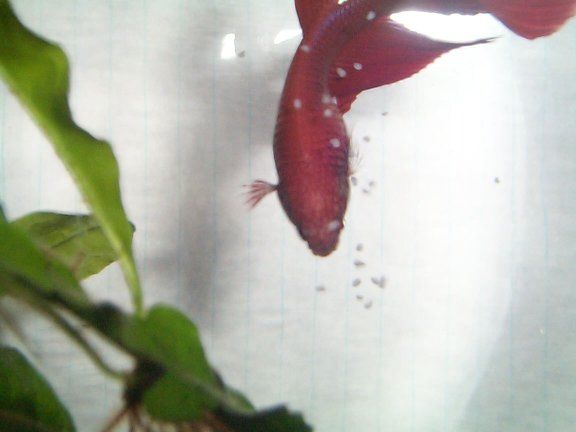 The eggs are very tiny and some have managed to get wedged between the rocks but Fearless was extremely diligent at hunting them out and putting them into her bubblenest. 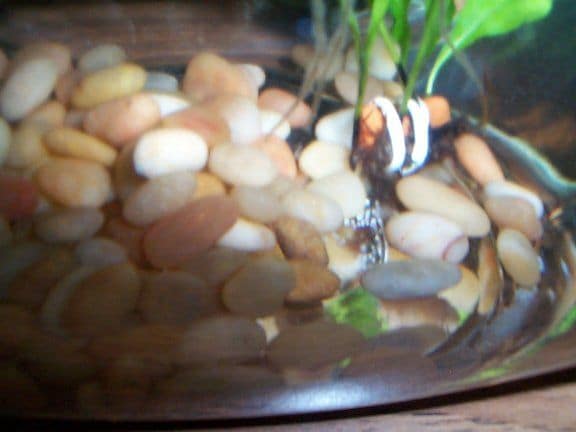 Whether Fearless tired from a daddy betta’s work or knew that these eggs were not fertilized, this story, at least, ends with a very fine caviar snack! 🙂