You are here: Home / Breeding Bettas / Other fish / Neolamprologus brichardi 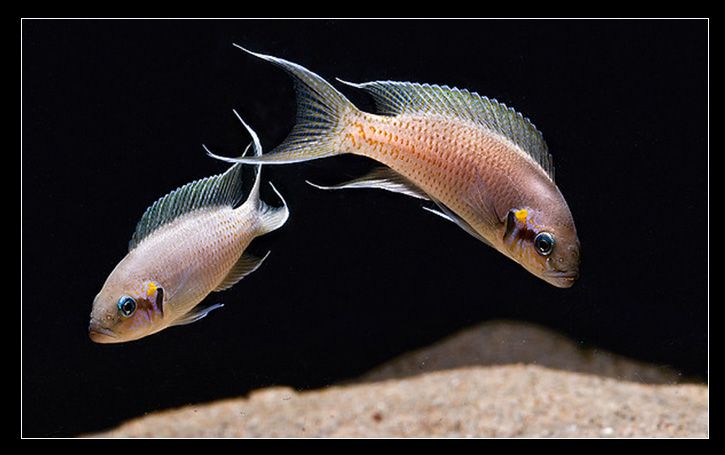 Although deemed by many to be an invertebrate feeder, this cichlid is an avid consumer of fresh lettuce. Its normal food in captivity should be a varied diet of tropical flake, cichlid pellets, frozen or live bloodworm, daphnia, brine shrimp and mosquito larvae.
*When I offered lettuce as an alternative to my breeding pair which had a 20 gallon/90 litre tank all to themselves, they declined every time. My conclusion is that the pair I kept in my 120 gallon/545 litre tank, (which is primarily a community of Mbuna), was somehow induced to feed on it by the frenzied devouring idiosyncrasy of the rock dwellers.

Alkaline pH of 8.5 / 9.0. The water in the lake can exceed 9.0. Carbonate hardness 15. Temp 74 -78 degrees F.
Set up: Substrate – sand 70% crushed coral 30%. Décor – rocky reef, making sure there are plenty of caves. Suggestion – make a point of only using limestone rocks. The latter and the crushed coral will help to buffer the water. Another suggestion is instead of having the reef running along the back, have it at one end, or if you have the space, one at each end.
Compatibility: They are aggressive to their own species and to any subspecies with in their genus. I have found that the aggression is only used in defense of territory or young. It is not a good idea to have other species of the Neolamprologus genus as tank mates. That is not to say you could not, for if your aquarium is large enough then you would have no problem adding N.lulupei, N. brevis or in fact any of the shell dwellers.

N. brichardi are egg layers and spawning takes place on the substrate inside a cave. I must mention here that until I read an article on this species breeding habits, I was always of the mind that it was on the walls of the cave where the eggs were attached. I would like to confirm for myself that it is the floor of the cave where the eggs are placed. What does favour the floor of the cave is the fact that the pair continuously removes the substrate down to the glass base, or in some sites down to the bare rock.

If you follow the suggested setup, and you are fortunate in obtaining a pair, then it’s just a matter of popping them in and letting nature take its course. If you have used a 10 gallon tank then it would be a good idea to remove the adults as soon as the first brood appears. There is good reason for doing this, as within a fortnight to three weeks you could see the appearance of another brood, and that’s not good in a small aquarium. A single brood from adult breeders can be in excess of 80+, which is really more than a tank of this size can handle. Now let’s assume you are using a 40 gallon tank and just a single pair.

This is where it gets interesting, for should you allow the adults to remain, and they produce a second brood you will find that the first brood will remain and assist the adults in the protection of the second one. This situation will carry on for as long as you leave the adults with the fry. The only problems I have encountered with the breeding of this species is when the fry reach the one inch plus size. I found that males within the group start to become overly aggressive toward each other, and to escape those attacks they take to leaping out of the water. A good fitting condensation tray is a must; also make sure there are no gaps left around the stress bars, as you can bet your last penny that they/it will find them. A really interesting and easy cichlid to breed.

You will find that if you leave the parents with the first brood and subsequent broods that aggression will be less obvious. It is not until the size of the juveniles within the first brood reaches the two inch mark that the adult male turns on his aggressive trait. This you will find will be directed toward the young males. The intent is to oust them out of the group, which in the wild is quite effective. In the aquarium it is a totally different scenario and one which has to be dealt with. I do this by removing the adults and all the juveniles around the one to two inch mark. The juveniles are placed in a grow- out tank and the adults are split up for a well earned rest.