You are here: Home / Equipment / Filters / My Experience with Filters (positive results)

Knowing that some Bettas have difficulty with a filtered tank, I thought you all might want to hear some positive experiences regarding Bettas and filtration.

I received my first Betta, “Sushi” as a gift from a co-worker in March/April 2002. He came with a gallon size vase, gravel and a silk plant. I purchased additional silk plants and decorated his home as an underwater garden. De-chlorinated tap water changes were made at 25% (twice) and 100% (once) a week. This was fine and worked well but I contemplated over the possibility of a 2-gallon filtered tank so I wouldn’t have to make so many frequent water changes, especially since I had also acquired a second Betta named, “Apache” so named because his fin coloration reminded me of native American artwork.

At first, I hesitated over the decision after reading how some Bettas have difficulty with filtration; however, I decided to give it a go and purchased a 2-gallon tank (AquaTank Plus) from Wal-Mart. I also purchased additional gravel and a silk plant decorated plastic “driftwood” that formed an arc on the underside to serve as a cave or “hidey hole”. The hexagon-shaped tank has an under-gravel filter system and comes complete with hood light (which I don’t bother with), under gravel filter, air pump, airline tubing, air stone and uptake tube for aeration.

The tank and non-electrical items were rinsed well in hot water. I used room temperature de-chlorinated tap water with aquarium salt added. The new gravel was a bit of a problem – very dusty and it had an odor to it. There was some kind of substance on it “to keep the rocks from fading” the package said. In my opinion…definitely something that could be done without! Another drawback I had was that the tank smelled strongly of plastic. It may be just me (I have multiple chemical sensitivities) but after I had placed “Sushi” in after the initial 48-hour water cycle run, he turned from a healthy turquoise blue and black to a little gray after about 20-30 minutes. (A typical reaction time to toxins.) Thinking it may be the plastic odor that was bothering him, I removed him and placed activated carbon in the water and ran the tank on its own for an additional 3-4 days to help dissipate all the odors and then re-introduced my Betta to the water. He LOVED it!

He fluttered and danced his way around the tank exploring every nook and cranny. The aerator didn’t seem to bother him in the least. Quite contraire, he was mesmerized by it and would watch it as though he was watching TV or something. He would go after and try to eat the smaller bubbles. After a while, he gave up on eating the bubbles but will still occasionally sit and watch his “personal TV”. He is quite curious and entertained by it. (Please note: If your bubble tube is below the water line you may want to roll and stuff a small freezer bag around the tubing in the tube and have it extend pass the water level. This will help slow down the current, if that becomes a problem for your Betta.)

The filtration has lessened the need for frequent water changes. (Less stresses on the Betta…an added plus!) I keep an eye on ammonia and nitrate levels once a week and make water change adjustments, as needed. (A small floatable plastic or Styrofoam disk can be used that bubbles can adhere to for the bubble nest.) “Sushi” seems to be much happier and definitely more active than when he was in the gallon vase. “Apache” has also been introduced to his own 2-gallon (AquaTank Plus) tank and has done well. My 10-year-old niece and her brother have each obtained the 1-gallon size (AquaView) for their Bettas. Both Bettas are thriving and doing well with no adverse effects. 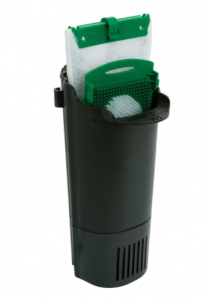 I have concluded that a “filtered” tank does not stress the Betta as much as some may think. Many times if the Betta was “stressed”, it may have been due to unhealthy living conditions the poor fish was in to begin with. (Who knows how long they have been in those little cups or when they were last fed or had their water changed!) We all know some pet shops are notoriously negligent in properly caring for these little guys. It is my guess that a high percentage of them never live pass a week or two due to some of these unhealthy and preventable living conditions.

Water imbalance may be another factor in causing stress. It is imperative to make sure the items you place in your tank, especially the gravel, be thoroughly rinsed with hot water. The tank also needs to cycle before putting your little guy in. Most manufacturers recommend 48 hours to one week. I recommend 72 hours to one week. It also helps to place a canister of activated charcoal in the water while it does this. The charcoal will help eliminate toxins by absorbing them. Adding aquarium salt too will help stabilize the water’s electrolyte balance and aid in reducing any stress your Betta may feel due to being placed into his new home.

Thus far, I have had nothing but positive experiences with Bettas and filters. With the noted precautions above, I would definitely recommend a tank with an under gravel filter system for your little finned Betta friend, too.