You are here: Home / Breeding Bettas / Other fish / Catfish: Understanding These Scavengers 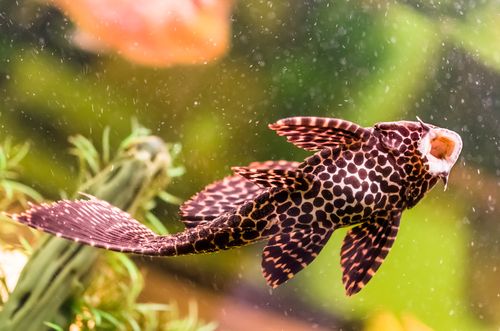 When an aquarist makes the decision to introduce catfish into the community aquarium or to set-up an aquarium dedicated to a group of catfish, understanding the needs of these fish is a must. Catfish are a large group of fishes that are regarded by most as a single order called Siluriformes (sometimes called Nematognathi). Others place them as a suborder, Siluroidei, of the order Cypriniformes. However, in most classifications after 1966, the catfishes are considered an order, the Siluriformes, consisting of 32 families. There are 2,200 plus species that fall under 400 genera of catfish, most of which (some 1,300) inhabit the fresh waters of the New World. The remaining species are scattered around the world with the greatest number occurring in Africa and Asia.

Temperature is the main reason that distribution is limited, few or no species seem to be found in the extreme southern regions of South America nor in the northern areas or Eurasia and North America. There are 2 families that inhabit brackish and marine environments. They are the Plotosidae (Coral and Tandan Catfish) and the Ariidae (Sea Catfish). South America has some of the most primitive catfish found in the world today, making some of them the most unusual in the world.

Siluriformes have developed many different ways for each to adapt to its own environment. The most important is the intake of available oxygen. The types of habitats that catfish live in range from the still waters of lakes and ponds to the cool rapids of mountain streams. Many require highly oxygenated water that is both clean and clear. Cool water maintains a higher level of oxygen than the stagnant, silt-filled water of the jungle ponds and swamps. Adaptations in this area are as diverse as the animals that developed them through time. In the hill-streams of Asia and Africa the fish have a highly modified mount for holding on to rocks and have modified gills to take in oxygen.

This is done by suspending breathing for a moment to allow a suction to form, then the intake is totally controlled by the modified gills pumped solely by the movement of the operculum. Some animals have taken this method a couple of steps further by having a streamlined body and pectoral ‘spines’ that assist in regulating the flow of water past the operculum. Catfish do not have spines in the true sense that other fish have. They are really a ‘spinous ray’, found in the pectoral, dorsal and sometimes the adipose fins. The spinous rays found in the pectoral fins are unique in these animals because of the fact that they are quite strong and often serrated on both sides. This makes them an excellent defense weapon.

Other modifications for breathing include the use of the intestines by taking in air at the surface (Loricariids and Callichthyids) , swallowing it and absorbing it with the thin walls in the digestive tract. The remainder is passed on through the vent. Species found in the genus Clarias have a labyrinth device. Several other genera have multiple uses for the swim bladder, one of which is for respiration. The Heter-opneustidae (Fossil Cats), have airsacs that run nearly the entire length of their bodies which are connected at the second and third gill arches by way of modified gill filaments and organs. These airsacs resemble lungs in regards to function and appearance.

Many catfish have been placed in the unusual and even the oddball category in the aquarium scene, and for good reason. They have adapted themselves to their own environments very well by making multiple use of some of their features. The spinous rays are just one of those items that have more than one use. Their strength and toothed edges on the pectoral fins, used with the one in the dorsal fin, make for a great defense mechanism against animals and humans alike. These make the fish a nasty mouthful. Nile River crocodiles have been found on the banks of the river dead with catfish lodged in their throats.

Most of the time they are used as a stinger in a defensive or passive use. Several of these animals take this defense a step further by adding poison. The poison gland is normally located at the base of the pectoral fin and secreted through the spine or its edges. Most noted is the previously mentioned “Fossil Cat”. This catfish is not found in stores very often and must be handled properly. They are very aggressive and will not hesitate to use their weapons. The sting from this animal will cause major swelling and illness to the handler. Most stings from the other poisonous catfish deliver the same effect but are rarely fatal. Some other fish have spines along the lateral scutes and these are combined with thick skin and armored plates, making them very tough customers to eat.

The swim bladder is another organ that has multiple uses in catfish. As was previously mentioned respiration is just one use. One other use is to amplify the sound that is created when the dorsal and pectoral spinous rays are moved in their sockets. The muscles and filaments connected to these spinous rays and sockets are linked to the rear skull and vertebrae in the spine in other catfish. These are also attached to the outer walls of the swim bladder and act like springs. When contacted they cause the walls of the swim bladder to vibrate and create a squeaking or croaking noise. This sensation can be felt with the cooperation of the catfish, of course, by touching the fish on the soft part of the belly between the pectoral spines. Doradidae (the Talking Catfishes) and Synodontis (the Upside-down Catfishes) are the two most well known users of this defense mechanism.

Catfish use their swim bladder the same way that other fish use theirs, but catfish have yet another use for theirs. Its called the “Weberian Apparatus”. This is a very complex series of bones, muscles, and ligaments that connect the inner ear to the swim bladder. What happens here is that the swim bladder is used to amplify sound that the fish receives instead of being used to produce sound. Sound is picked-up through the inner ear, then is passed on along a set of paired bones that are connected by ligaments to the rear base of the skull and the modified fourth vertebrae. These bones make contact with the swim bladder. The sound is then amplified by either direct or indirect method of attachment to the swim bladder. This is a very effective way to detect many types of threats the animals might face in the wild, and also makes them very hard to sneak up on in the home aquarium.

The methods of feeding used by the Siluriformes are as varied as the diets themselves. They range from algae and invertebrates to live fish. Some catfish are active nocturnal predators, others search for snails and freshwater shrimp, and some scrape rock and wood for algae. Invertebrates seem to be the one food that all catfish take in at least some time in their lives. The family known as Trichomycteridae (the Parasitic Catfish), are often found feeding on the gill tissue and blood of other fishes. Another very unusual method of feeding is that of the Indian species of the Schilbeidae family, where scales of other fish are the main staple in their diet. Catfish rarely use their eyes to find food, instead food is detected by taste. Keep this in mind when maintaining these animals. If it tastes good and the catfish can get its mouth around it, consider it eaten. Catfish are high on the list of opportunistic feeders. Many aquarists have lost their schools of small tetras while their catfish stay fat and healthy.

Swimming techniques are also varied, those that are good mid-water swimmers prefer to be kept in groups and get very nervous if they aren’t. They are the Schilbeidae (Glass and Pangasius Catfish), the Siluridae (Sheat Catfish), the Plotosidae (Coral Cats) and some species of Mochokidae (Upside-down Catfish). Other catfish that like to swim in groups live on or near the substrate, however, that would require writing a list based on separate species and the list would a long one. Many of the larger catfish tend to be solitary animals relying on armor or unique color patterns to give them some safety.

Understanding the differences between the families of catfish is very important. These animals are filled with sensory organs that are there to help them survive. If not taken care of properly, the animal may just be alive instead of thriving. Should proper care not be taken into consideration, the animal will probably be lost which can be quite expensive. These fish may be at the bottom of our tanks but they shouldn’t be treated as the last to get the good food the other fish receive. Keep this in mind and provide hiding places, proper water quality, and they will repay you with many hours of enjoyment.