You are here: Home / Illness & Disease / Hyperplasia in Fishes

Hyperplasia is a fancy way of saying abnormal increase in cell numbers or cell numbers “gone wild” leading to a size increase of the affected tissue or organ; it can also be used as another term for benign growth, or tumor. Hyperplasia can be induced by many things, including chronic inflammation, hormone dysfunction, and irritants of many sorts. In humans some examples of hyperplasia are calluses (from abrasion), lipomas (fatty tumors), endometrial hyperplasia, and benign prostatic hyperplasia (BPH).

Hyperplasia in fish is the fish’s response to ward off or block something that irritates its tissues, whether externally or internally, or to quickly heal an injured or irritated site. Localized hyperplasia can encapsulate holdfasts of parasites, and whole parasites such as ICH. If the irritant is in the water, more sensitive tissue like gill epithelium is usually affected first and worst. If hyperplasia is observed externally on the fish, then one might expect the gills to be in fairly bad shape with hyperplasia; such fish should not be bought, as they may not live long due to oxygen starvation.

If the irritant, or toxin, is not strong enough to kill the fish, then hyperplasia may be induced. Hyperplasia can be accompanied by increased mucus production induced by the irritant; this additional mucus may also reduce oxygen uptake. 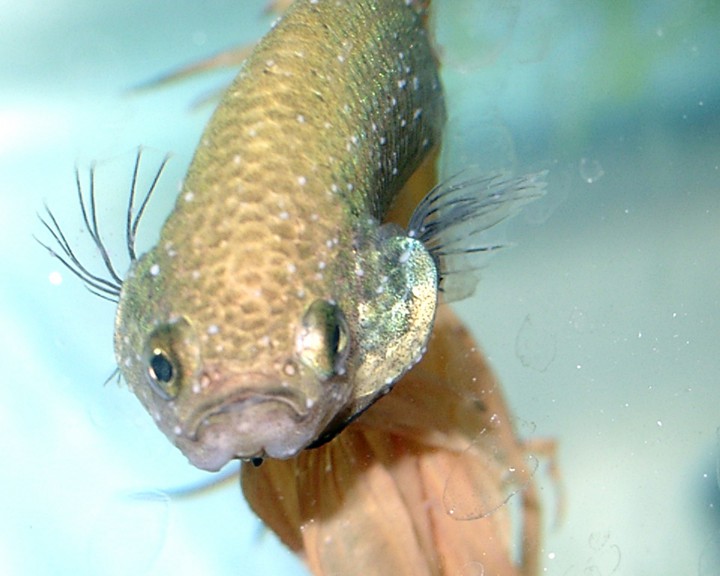 The presence of large numbers of parasites (for example, Gyrodactylus or Trichodina or ICH, Lawler) attaching to and eating on and thus irritating skin and fins can lead to localized hyperplasia around the sites of attachment or feeding. Some parasites, by their attachment and feeding, can thus induce the host to produce more food (hyperplastic tissue) for them.

Nipping, and fighting among fish can lead to hyperplasia at the sites of injury.

4. Physical irritation caused by substrate or tank objects or suspended matter in water.

In the case of fish that swim or fed or hide at the bottom of the tank, a rough substrate can stimulate hyperplasia from the constant irritation of rubbing against a rough surface (Lawler: similar to calluses of humans). An example would be the growths that occur around the mouth, and on the fins and tail of corydora catfish and various other bottom-frequenting fishes.

Suspended material in the water can cause irritation to the gills and skin of fishes, and initiate hyperplasia.

Hyperplasia can be a big problem in the aquarium trade. Fish affected may not get enough oxygen or be disfigured enough to prevent sale. Also note that severe gill hyperplasia can decrease gill function by fusion and enclosing gill lamellae and greatly reducing the respiratory surface area available for oxygen uptake. Such hyperplasia can severely stress the fish, or can even lead to death from lack of oxygen. When the body size and oxygen demand increase with growing fish, and then outweigh the capacity of the affected gills to take up sufficient oxygen, the fish’s tissues and organs become highly stressed from lack of oxygen, leading to death.

If your fish had hyperplasia when you got it (them), then the irritant was somewhere in its (their) previous waters from initial collection or rearing to retail sale. If this occurred after you got the fish, then the cause occurred in your tank, and you need to find the source.

If the hyperplasia is on the fins and tail, one could assume the irritation is either from an irritation strong enough to affect the tougher (than gill tissue) skin and fins, or from irritation from the tank substrate, or (3) possibly from some fairly minor water irritant that is not manifested until a fin or tail injury occurs.

If the hyperplasia is on the body, suspect a fairly strong water-borne irritant.

If the hyperplasia is on the gills, suspect a water-borne irritant, either chemical or particulate.

Hyperplasia, just being excessive cell number growth, will not be “cured” by antibiotics or other treatments. In fact, the application of such medications may have caused the hyperplasia to begin with, or even stimulated more such growth. The use of strong irritants to collect the fish initially (as chlorox, compounds of cyanide, ammonia, etc., A. Lawler), the use of too much medication or relaxants before, during, or after shipment, and the overuse of medications after arriving in a home aquarium can all lead to hyperplasia. A fish that is rapidly breathing in a pet store may already have gill hyperplasia and should not be bought. If there are any unexplained growths on the fins or tail, do not get the fish.

Lawler: You cannot control what went on before the fish got to you, but you can try to prevent further problems. Do not overuse fish medications, or use any irritants or sprays anywhere near your tank or air intake. Have compatible tank occupants, and carefully treat for external parasites. Check roughness of tank substrate, and other objects in tank. Verify tank decorations are not leaching toxins, and your water source is not contaminated.