You are here: Home / Illness & Disease / Monogenea of Fishes

Monogenetic trematodes (Monogenea) are parasitic flatworms mostly found on the gills, fins, skin, and eggs of freshwater and saltwater fishes. They vary in size from about 100 microns to 2 to 3 cm in length. They hold onto their hosts via a combination of hooks, anchors, and suckers at their posterior end (opisthaptor), and use the anterior end (prohaptor) for feeding and assisting in moving to other locations on the host. They feed mostly on host blood, mucus, and skin cells. They are hermaphroditic, and lay eggs or give birth to live young. Their life cycle does not involve more than one species of host. 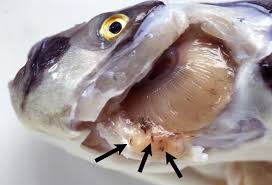 In the natural environment they usually do not cause many problems unless the host is continually being reinfected so that massive numbers of worms build up on the fish. Fish that school can easily get heavy infections. In some areas of Scandinavia, fish (salmon and trout) in some rivers can be reinfected so badly that the fish die; the causative worm is Gyrodactylus salaris.

In confined spaces, as fish tanks, various species of Monogenea can reproduce and multiply so quickly that they can overpower their hosts. They damage the host through ingestion of mucus, skin, and blood so that much of the fish’s protective coating is destroyed and then potentially dangerous infections can set in, by injury to gill tissue that leads to fusion and hyperplasia of gill tissues, and the subsequent decrease in gill surface area and thus a decrease in efficiency of respiration, and by mechanical blockage of respiratory surfaces by their huge numbers, etc.

Most Monogenea are fairly host-specific, i.e., having a genetically narrow range of host species, so unless the hosts are closely related, or the worms have low host-specificity, a particular species of worm does not usually infect different species of fishes.

Some symptoms of heavily infected fish are (light infections may not be noticed):

IF one has access to microscopes, and can examine the gills and skin of an anesthetized fish to determine the reproductive type of Monogenea present, a suitable treatment method can be easier decided. When the fish is knocked out, the attached worms also get stressed. This stress causes them to lay eggs, or give birth, fairly quickly. One can then examine the gills or skin/fins with a microscope to ascertain the type of reproduction. Return the fish to good water to revive it.

Control of those Monogenea that lay eggs that leave the host and are free in the tank and have a free-swimming larval stage can be done by filtration of infective swimming stages out of the water via a diatom filter. This means of control uses no chemicals and does not harm the host. When filtration is employed, and most of the infective stages are removed from the tank before they can attach to the fish, then there will not be large numbers of worms reinfecting the fish in the tank. When these attached adult worms die off, then the fish will be eventually free of worms WITHOUT using any chemicals. Thus, continual filtration of the tank water will eliminate most of the free-swimming larvae (before they can attach), those adults attached will eventually die off, and lethal loads of worms do not occur. Many of the Monogenea reproduce this way.

Monogenea that have their eggs stay with the host

Some Monogenea attach their eggs to their host gills, others have eggs with long filaments that get entangled in the gills. The resulting hatching larvae can thus easily find and attach to a suitable host (= usually the same host of their parents). This type of Monogenea generally must be treated with a different salinity or chemicals for control.

Control of Monogenea that reproduce via live young (Gyrodactylus and similar genera) is more difficult as the young that are born can quickly attach to the same host as their parents. Various chemicals and/or different salinity can be used to cause the worms to directly detach from hosts OR to cause excessive mucus production via host irritation so the worms are caught up in the excessive mucus and then sloughed off with the mucus.

IF one does not have access to microscopes and cannot ascertain the reproductive type of Monogenea, then he should cover the possibilities: do both. add a diatom filter PLUS use a salinity or chemical treatment.

There are numerous chemicals on the market to control Monogenea. Most are toxic to both the worms and the fish, and can thus be dangerous to your fish. Use at your own discretion.

My usual chemical treatment remedy over the years has been a bath of 1:4000 formalin for 15 minutes (a close approximation of this is one ml of formalin in a gallon of water). Treatment should be done in a separate all-glass jar, or aquarium, that can be aerated via an air stone; treatment chemicals can usually affect, or kill, the bacteria of biological filters and cause the original tank to crash.

After the fish are treated and returned to their original tank, remove air stone, stir the water in the treatment tank in a circular motion, and wait until all debris settles. Then suck up debris from center of container, and examine with a dissecting microscope for the dislodged worms (to verify they have been dislodged and/or killed).

Since there is a possibility that all worms are not knocked off or killed by the treatment (whether it be a salinity change or a chemical), another treatment may be necessary, or even advisable, a few days after the initial treatment.

Rough handling of the fish, or too long a treatment, can cause too much damage of protective mucus coating and skin and result in subsequent bacterial or fungal infections.