You are here: Home / Experience / My Experience Male & Female Cohabitation 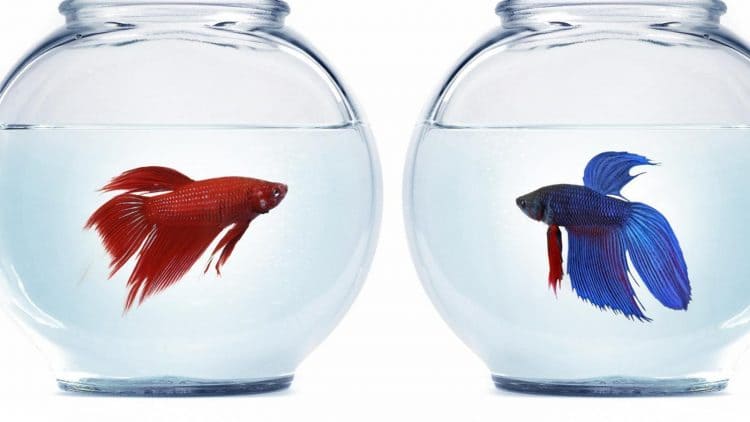 I’ve read over and over and over again about how you should never put a female in with a male unless she is with eggs. Except for a small article I found on Petsmart.com where it said a male can be kept with females and gentle fish, I thought that the guys would be bachelors forever (except for those rare honeymooning occasions.)

But after not having the best of luck with my female community tank, I decided to try something new.

My oldest and favorite betta is Bartok, a beautiful blue/black veil tail male. Since my new obsession with my additions to the betta family, I admit I haven’t been able to spend as much time with him as I used to. I noticed that he was affected by this because his bubble nests were smaller or non-existent and he would flare and show off whenever I would enter the room, trying to say, “Look at meee!!” I thought that by putting him near my other males, he would have a grand old time showing off for them, considering I had read an article on Healthy Betta about how bettas grow an attachment to their neighbors.

But they didn’t seem to have a great effect on his mood.

When I was having so many problems with the largest female in my community tank picking on the others, I felt bad about taking her away from that kind of environment and putting her in isolation for the rest of her days.

Being that Bartok is the biggest male that I have, and that they conveniently have the same coloring, I thought it would be neat if I could introduce them to live together in a 2 gallon plastic jug (which used to house cheese-balls…talk about reduce, re-use, recycle!) Maybe he could keep her under control.

I moved all his decorations and hidey-hole into the new jug and added a few more bushy plants (for her to hide in, in case he was too aggressive.) I then put him in the jug and her in a clear plastic cup, which I floated in the jug for about three hours, to let them get to know each other.

I decided to introduce them together in the hopes that when Bartok became territorial of his new surroundings, she would be part of them as well, and not seen as an intruder.

When I finally released her, he flared at her and chased her a bit, but was, in my opinion, surprisingly gentle (compared to what I’ve seen when he ‘s put next to another male!) Because females are much “zippier” than males, she managed to escape any real threat from him and hide in the plants.

When Bartok settled into the idea that she was “his” now, I could almost see his fishy heart swell with pride. The greatest thing that made me smile and almost cry with love was she would come over to him and push her face against his side or his fins in a fishy kiss, and he would slowly swim away. His long fins and tail would wash over her head as she calmly floated, almost like she enjoyed the caress. In fact, she would keep doing this over and over until he’d get fed up and chase her away again.

My biggest concern in introducing them was that she would nip his extraordinarily long fins, as she was prone to do to the other females.

On the contrary, she seemed to be fascinated by them and couldn’t get enough of those caresses.

He has yet to nip at her, though he does occasionally flare , but I think it’s more of a macho thing.

Today they are doing wonderfully. Bartok has taken to building big fluffy bubble nests again, which makes me proud. The female community tank has become peaceful since my addition of two baby females. I think their small size has attributed to the lack of aggression.

So, in concluding this story about male and female co-habitation: it might not work for every pair, but it can be done! And I guarantee it will make you smile in awe every time you walk by and see their little faces looking at you side by side. 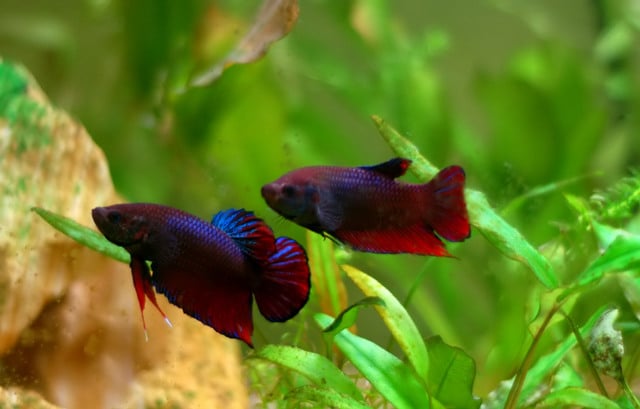