You are here: Home / Healthy Betta / Male or Female?

Everyone has seen the beautiful fins of the betta splendin – like a large flowing flag showing his colors. Yes, these are male bettas. But do you know what the females look like? Did you know females can sometimes exhibit longer finnage than usual? Here are some other ways you can sex your betta.

MALE BETTAS
The male betta is mainly characterized by his longer flowing fins and his flaring at other bettas when in view. Like other species, the male betta generally has a longer body and is bigger than the female overall. But this is still not a “definite” way to tell if you have a male or female as older females have been known to grow quite large. It is what males do not have that make them obviously males.

FEMALE BETTAS
The female betta is generally smaller than the male with shorter finnage. They are more “communal” and less aggressive than the males but I have heard of very aggressive females. 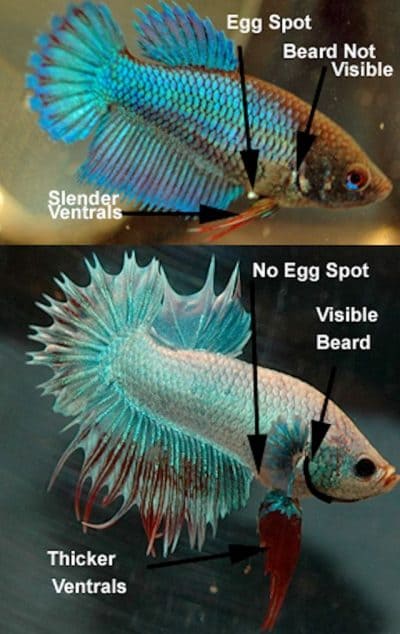 One definite way of knowing if you have a female is they exhibit a small white dot on their stomach directly behind their ventral fins (short fins on their stomach) – the ovipositor.

A female betta is more likely to exhibit “fear stripes” and vertical stripes on their body when ready to breed. The stripes are quite obvious but remember the vertical fear stripes can be displayed by the male.

IN SUMMARY:
Look for the small white dot – it’s a dead give away!