You are here: Home / Archives for Breeding Bettas 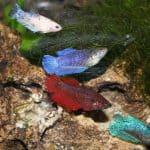 It is a well-known fact that male bettas cannot share a tank. They are aggressive and will fight, sometimes to the death. Many people can and do keep their male and females (only one male betta in the tank) in community tanks with other fish like gourami's and neon tetras Females bettas are slightly different than their male counterparts beyond an ovispore and easy stress … END_OF_DOCUMENT_TOKEN_TO_BE_REPLACED 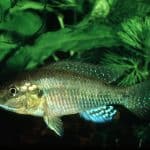 The cichlid genus Pseudocrenilabrus consists of four scientifically named Dwarf Haplochromis endemic to the African continent. Here they are found in a variety of freshwater habitats (including rivers, sinkholes, lakes and creeks) abounding with natural forms of cover which afford protection against the activities of fishing birds and snakes but, sadly, cannot hold back habitat … END_OF_DOCUMENT_TOKEN_TO_BE_REPLACED 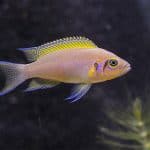 When I first started keeping tropical fish as a young child, I often marveled at a fish many stores identified as the brichardi cichlid. The fish may not have been colored with the spectacular coloration of the Malawi Peacocks or the Victorian Haps, but what it lacked in flashy color the brichardi made up for in grace. Since those early days, Ive kept many different fish, but … END_OF_DOCUMENT_TOKEN_TO_BE_REPLACED 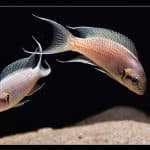 While the Mbunas and Haploids of Lake Malawi would be more familiar to most aquarists of the ACT and surrounds, many fish from Lake Tanganyika are commonly found in local fish shops. The Lemon Cichlid (Neolamprologus leleupi), the Princess Cichlid (Neolamprologus brichardi), and several species belonging to the Juliochromis genus and Tropheus genus are commonly kept. Perhaps … END_OF_DOCUMENT_TOKEN_TO_BE_REPLACED 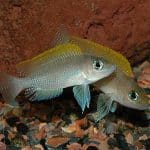 This is another species of Lake Tanganyikan cichlid that I have been working with recently. As you can tell by the name this is a species of fish that has yet to be officially named. Although it does resemble Neolamprologus quite a bit, it is currently classified as a separate species. In Ad Konings 'Back to Nature Guide to Tanganyika Cichlids', the author gives this fish … END_OF_DOCUMENT_TOKEN_TO_BE_REPLACED 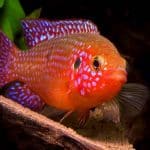 In this article I will be talking about my experiences with a West African substrate spawner, the Hemichromis bimaculatus, commonly known as the Two Spotted Jewel Cichlid. Keep in mind that not all substrate spawners will partake in these exact events from one specie of fish to another. All information contained in this article is based on my experiences with the twelve … END_OF_DOCUMENT_TOKEN_TO_BE_REPLACED 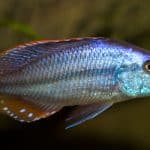 Dimidiochromis compressiceps has been on my list for many years, as a fish that I had wanted to keep and breed. I have observed this fish in the wild in its golden form at Chizumulu Island, Malawi and Cobwe, Mozambique. This golden form (male, female are both golden), is available to us Cichlid addicts, but the fish does not seem to keep the colour very well under aquarium … END_OF_DOCUMENT_TOKEN_TO_BE_REPLACED 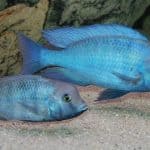 Introduction Cyrtocara moorii, also known in the hobby as Haplochromis moorii or the Malawi Blue Dolphin, was named after the collector of the type material, J. E. S. Moore. Moorii was first described in 1902, and was first exported out of Africa in 1968. It gained the nickname "blue dolphin" due to its pronounced forehead (called a nuchal hump) and lips and overall … END_OF_DOCUMENT_TOKEN_TO_BE_REPLACED 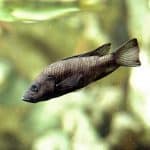 Down in Western Africa in the country of Cameroon there are many volcanoes that are now occupied by crater lakes. One of these lakes is Barombi Mbo. Barombi Mbo is home to over a dozen cichlid species, including 11 endemic species, which evolved from a single species over the last 10,000 years. The cichlid species in Barombi Mbo include Stomatepia pindu, Stomatepia mariae, … END_OF_DOCUMENT_TOKEN_TO_BE_REPLACED 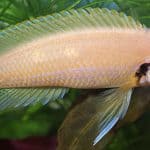 I have been keeping Lake Tanganyikan cichlids as long as I have been a hobbyist, which I guess is over 20 years now. But for whatever reason I have not kept any species from the genus Chalinochromis until recently. I am now working with wild pairs of Chalinochromis brichardi 'Masked' and Chalinochromis sp. 'Streaked Masked Mabilibili'. I have recently been able to successfully … END_OF_DOCUMENT_TOKEN_TO_BE_REPLACED