You are here: Home / Betta splendens / What is a Plakat Betta?

We now have a whole page dedicated to the beautiful short-finned Plakat Betta. Learn where they came from and how to pick the perfect Plakat.

What is a Plakat Betta?

A: In Western countries a Plakat (pronounced pla-COT) bettas are a short-finned variety of Betta Splendens. The bettas were originally selected out of rice patties in Thailand and Southeast Asia and bred for their fighting abilities. Plakats have large strong bodies, large jaws and small fins. Unlike the long finned variety commonly sold as pets, Plakats require short fins so they can move quickly in a fight and suffer less damage when paired with another male. In Thailand, both the long finned and short finned bettas are called Plakat Thai. They refer to the short finned specifically as Plakat Morh and the common long finned variety as Plakat Cheen which translates to “Fighting fish from China.”

Plakats aren’t found easily in local fish stores but can be purchased on Aquabid.com or from a Thai breeder directly. Because they were bred for fighting their temperament may be more aggressive than the long finned variety and consideration to tank mates should be given when preparing a home for these fish. It’s important to note that while betta fighting is common in the Thai culture these fish are protected under animal fighting statutes in many countries including the United Kingdom, Australia and most of the U.S. 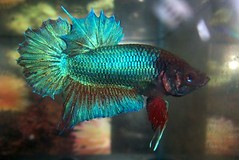