You are here: Home / Behavior / Stringy Fiber on Betta’s Gills 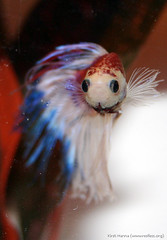 Several weeks ago on one of my Bettas a white thing appeared at one of its gills. It was small, about one or two millimetres long. It could be seen only rarely, perhaps about once per week or less. One person (who did not see it) thought that it could be a parasitic worm. I saw it again today and this time it was about several times the length. Then it came out of the fish and floated to the bottom of the aquarium. It looked like a white fibre wider at one end than the other. Last week I saw many such things floating in the acquarium, and cleaned that whole aquarium as a result. The Betta has been apparently healthy all this time and still swims around happily. Do you think that it could be a parasite or could it be mucous coming out of its gill? I have another Betta, in another aquarium, but that does not have the same problem.
My Bettas are in acquariums kept indoors with heaters. I have another acquarium outside with goldfish and native (Australian) fish. I have been using the same items to clean the outdoor and indoor acquariums.

A: I suspect if the white fiber-looking thing you saw wasn’t wiggling or moving on it’s own accord then it probably isn’t a parasite. It is possible that your fish was producing an overactive slime coat or possibly showing signs of disease like Flavobacterium columnare or a similar infection. Overactive slime coats are sometimes caused by additives to the water like salt or some water conditioners. Some medications may cause the Betta to produce a heavy slime coat as well. This often appears in the form of fibrous strings and commonly presents themselves near or in the gills. Overactive slime coat doesn’t generally cause any problems and will correct itself. Ceasing to add anything that might be contributing like aquarium salt or a new type of water conditioner (StressCoat for example contains Aloe Vera which may contribute to the problem), should help.

Flavobacterium columnare or similar bacterial infections are a bit more serious as they are directly the result of stress and usually poor water quality. They often times present themselves in the form of long fibrous strings as well and tend to gather around the mouth and gills. They may also take the form of short wooly patches on the body. This is often referred to as Flex, Cotton mouth disease, cotton wool disease or by it’s former scientific name of Flexibacter columnaris. There are also other bacterial diseases that are similar but require a microscope to diagnose. Flex is usually progressive and symptoms will worsen over time. In addition to the white strings you may notice sluggishness, loss of color, loss of appetite and the grey, white or beige fuzzy patches. If you suspect Flex you should consider antibiotic treatment. To learn more about Flavobacterium columnare visit the Flex page at Nippyfish.net.

Best of luck to you and your Betta and please do keep us updated on his prognosis.