You are here: Home / Breeding Bettas / My Experience in Breeding

Always being a fish person, when I went to purchase a betta and a small home for him, I didn’t think it would change my life.

My first guy lost his fins to fin rot one week after I brought him to my office. This prompted me to look on the internet for more information regarding this disease. I found a host of information on the disease as well as bettas in general, but the most interesting information I found was on breeding.

Remembering back to my teens, when a friend of mine bred two red veil tails and thinking of the excitement surrounding the event, I wanted to relive those feelings. So I set up my ten gallon with all that was needed for breeding; sponge filter, submersible heater, light and cover, plants, foam cup cut in half, and food to feed the fry. Then I needed to get two fish to breed.

The male, Alan, was a purple marble with white in his fins and the female, Annie, was a purple round tale, large by most standards. 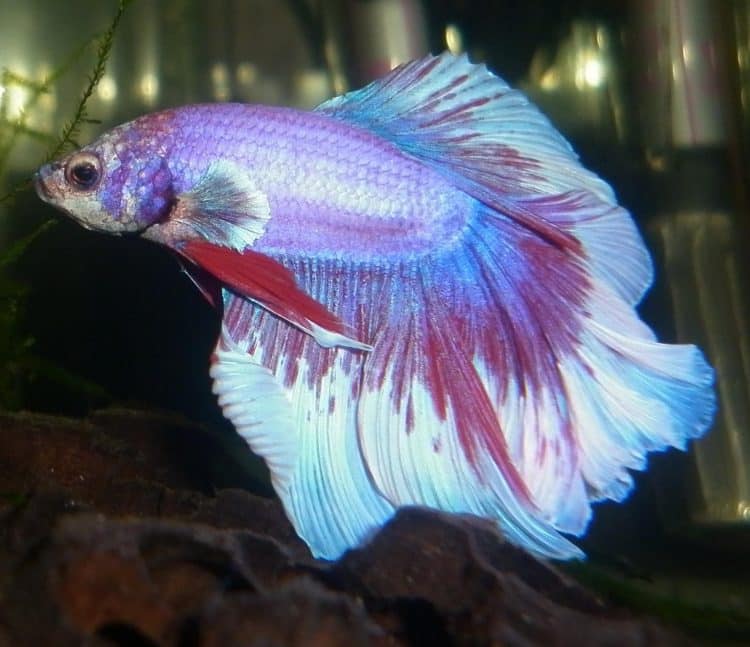 For two weeks I fed them frozen bloodworms and watched them closely. Annie would stripe up just looking at Alan, and Alan would flare at the mere sight of Annie. This was a wonderful sign of compatibility!

Alan was placed in the tank first and got to know the lay of the land. Annie was placed in a hurricane lamp in the tank so that Alan could see her and get busy with his nest. But no nest appeared. Within the next 24 hours, I released Annie and she hid out, showing herself briefly to Alan, then darting back into a hiding place. Then Alan got busy and started building a nest.

It wasn’t very impressive and had me a little bit concerned, but I was hoping nature would take care of itself. And it did.

I found the two spawning the next morning and it lasted for about 4 hours. Now, I have a very active 22-month old son, which I had to keep attention to while this process was going on. Every 10 minutes or so I would quickly check on the honeymoon couple and was awe inspired by the process. I wish I could have spent more time watching and learning, but Tommy called and I didn’t want him disturbing the process by saying “hi” in his own special way (banging on the glass).

Annie was removed when I caught her moving away from the nest and hiding out again. All I could see was the bubble nest, I thought maybe I missed something.

Right on schedule 24 hours later I saw tails hanging down and daddy tending the nest obsessively. Twenty-four hours after that, the little guys started falling and this is were I panicked. Alan was having a hard time keeping up with the fry and I felt he needed a little help to get those babies to stick. Lowing the water level about an inch may have helped him, but as I look back, he was probably handling the event the best he could and my interference was not necessary.

The father was removed a day later and then I started with LiquiFry No.1 and frozen BBS.

At this time, the little guys are about 10 weeks old. I think they are mostly female, as I have seen very little aggression, but the variety of colors I have are interesting. About 40 percent are blue and red with wild striping, 20 percent are blue and red finned with pink body and 40 percent look to be red finned with pink body (true Cambodian). From just reading information on how to breed, you are not truly prepared for the experience, but I learned a lot and can’t wait to start on the next family of bettas