You are here: Home / Breeding Bettas / Other fish / The Search for the Elusive “Marmalade Cat”

You’ll generally not see two OB fish with similar markings the pattern develops randomly. Other names for OB type markings are piebald, spotted, etc. There are a number of OB species: Labeotropheus fuelleborni & L. trewavasae, Metriaclima (Pseudotropheus) zebra, and the zebra-like ‘estherae‘ are just a few of many species with OB markings. 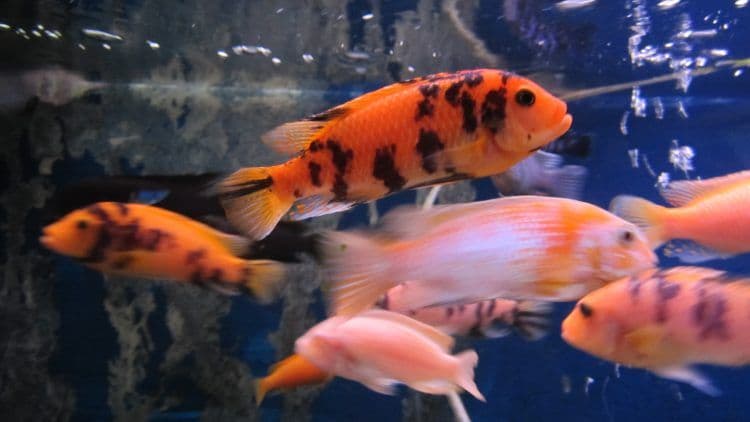 I have a tankful of active Metraclima OB zebras.

They are mottled with random black markings. On those fish, the females are more heavily mottled than the males. The males, upon maturing, get lighter in color with the black becoming a lighter bluish-gray and the alpha male will develop an ‘overcast’ of translucent blue as the ‘blotch’ nearly disappears. The blue on the males shows well in the images above.

I’ve raised many Metriaclima lombardi, and their fry are all identical with blue body and black vertical stripes. As the lombardi males mature, their stripes fade and the alpha male turns a bright gold. The subdominant males retain their stripes, and become an off-gold with some blue and stripes remaining. I seen some ‘Holding’ females that get that off-gold cast similar to sub-dominant males.

A strong demonstration of how drastically colors can change on maturing males.

I had a Labeotropheus fuelleborni female, OB blotched but no orange. I’d gotten several of these as BAPed fish last fall at a club auction, the OB female wasn’t originally ‘blotched’, but did develop the pattern when it matured.

Fish that may possibly fit the term ‘Marmalade cat’ are the Metriaclima estherae or “Red Zebra”.

This Malawi mbuna was described by Konings in 2005, and not often seen in the stores. I’d had a few of these when I lived in San Jose, but hadn’t seen them locally. 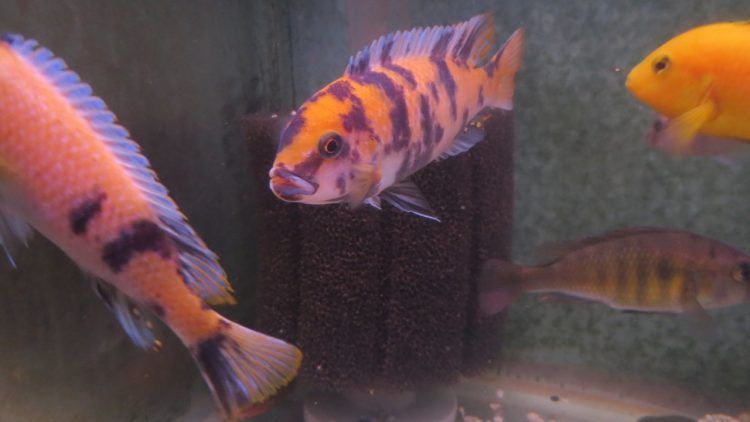 I obtained 11 juvenile and 20 fry of these Metriaclima estherae last winter. Two of the juveniles had calico OB markings. A bit of research on the internet about these fish revealed a number of pages on ‘estherae’. Most pages still refer to them as Pseudotropheus, and some even as “Mylandia”. What I found was that the typical estherae females are orange with males turning blue as they mature. There are “OB” or calico marked females known. No mention about when the males turn color or what the fry looked like (I assumed orange.. the surprise was to come!)

My estherae OB’s have lots of orange, so “OB” for “Orange blotch” is a true term for these fish. I assumed that the 9 plain orange estherae were either females or males soon to turn a blue color as the web sites described and the two OB’s were untypical females.

I raised the estheraes and moved them to larger tanks as they grew. They’ve always been the only occupants in one of my typical ‘specie tanks’ (I avoid mixing mature mbuna). Some of the orange fish showed slight variations in color, from a lighter orange-yellow to a deeper orange. No blue males were apparent, yet I soon noticed one female ‘holding’. I moved her to a 5gal tank with lots of Java moss (my favorite for mouthbrooding females) and some broken clay pottery shards for the fry to hide in. I haven’t seen fry being eaten by a hungry female, at least, I’ve never caught any eating them!. That female held her eggs & fry for nearly 3 weeks and released better than 30 fish. Half were her orange color and the rest a dark brown, with black stripes!

Soon another female, this one a bit lighter in color (more a ‘yellow-orange’) was holding and she soon released about 14 fry. These were all orange. Meanwhile, still no ‘blue males’ had yet appeared.

With no blue fish present, I wondered which was the male. Back to the internet and an expanded search had me learn that there are some flocks of the estherae with orange males, and there was a few rare OB males that retain their orange and show a little blue. So that’s it, the father was an orange male or one of the OBs. A closer look confirmed a very faint bluish overcast on the other OB, similar to my zebra OB’s.

I hadn’t found any information about fry or their colors and the color differences would have been disconcerting had there been another specie as tank mates (see the bit below found on a website regarding mbuna hybridizing across genuses). In a few weeks, the fry grew and the darker ones began showing OB markings just as the fuelleborni developed the patterns as it grew. But these dark estherae were also developing orange colors and their stripes were disappearing. As they grew, more of the orange calico patterns developed. By 8 weeks, the stripes were gone and a distinct OB with orange is now present.

I’ve asked about the estherae, and if they can be called the elusive “Marmalade cats”. Steve Lundblad said “Only an OB male ‘Labeotropheus trewavasae‘ with an orange dorsal is the original marmalade cat, though other species with OB markings and orange dorsal would also be considered such” he added “the Metriaclima estherae isn’t one.” But – my male OB estherae does have an orange dorsal, and it does have blue (sort of).

I sent an email to Pam Chin (of “Ask Pam” fame), and she answered “A ‘Marmalade Cat’ is any male that has an OB pattern, regardless of the species”. Nothing about orange dorsal, but she also said there were no male OB estherae, or that they’re very rare. Well, I must have one of those rare ones.

So, In addition to my orange females, the one OB female and one I’m sure is OB male (from the blue over cast as well as it’s dominating actions). I can assuredly add that I have an orange male, as one of those older ‘fry’ (about 8 months old) just had 5 orange fry! There’s no visible male, OB or blue in that tank, all those fish have similar orange colors and no markings.

It will be interesting to see what combinations of sex and colors I end up with from my colony. I know there are other various aquarium-selected strains such as the albino estherae, which looks nearly ‘normal’, as the fish is still orange with just the red eyes to indicate the albinism. No mention if the albinism suppresses the blue colored males.

Lot’s of confusion is cleared, but I’m anxious to see if I ever get a blue male.