Information on caring for the female betta is hard to find – especially females as pets and not breeding fish. Hopefully, I will be able to help you better understand the female betta.

The female betta is a lot different than the males. Not only are they different physically, they are different in personality traits.

The females, in my experience, take to filters much better than the males but they still need calm water space to live in. They also are hiders which means you should have much more than one plant and hidey hole in their tank. They need vegetation to hide in. They are more “zippy” and like to dart from hiding spot to hiding spot so getting a good picture is not always easy!

Females come in the same broad range of colors and still have the cute “betta face” with the downturned mouth and sloped head. The female betta can flare like the male but is not proned to do so unless provoked. They are also not nest builders but this does not mean it cannot happen. I have heard owners of female bettas say they have had their female make a small bubblenest. 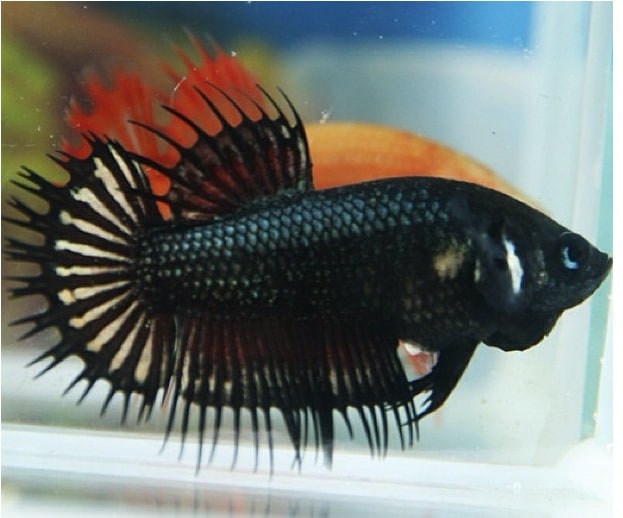 Now – females will swell up when they get eggs. This does not mean they must be put in with a male but you will want to watch her for signs of illness during this time. She will generally display vertical “breeding stripes” on her body and they will go away when the eggs do. She will not dispense of the eggs (rare occassions where they will) but they will be absorbed back into their body. They do not have to be bred and I suggest that without the proper preparations for breeding bettas, just allow the eggs to cycle as they normally would. Your female will look constipated but to know the difference, just look at her ovispore. If it is protruding from her body like a white tube, she is just full of eggs.

Females are also prone to fear striping – horizontal stripes on their bodies. These stripes can appear and disappear so quickly you will be amazed.

The females are definitely a different experience than the males. I enjoy my four girls and I think you would enjoy one as well if given the chance.

Look beyond the not so long fins and the aggressive nature and I think you can find yourself a new finned female friend!