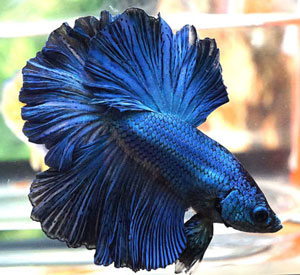 The wonderful thing about Betta fish, is that you can create many different types and colors of Betta, simply by cross breeding two different characteristics. Due to the fact that Bettas have been so heavily crossed bred over the years, there are now many different types available on the market. This can make determining the type of Betta you have, to be somewhat difficult.

For this reason, we have compiled a list of the most common fin types and Betta fish variations. Keep in mind that not all Bettas will strictly comply by these definitions or may even carry multiple traits from other types. This would be due to just how much breeders have been trailing different combinations in search of creating the perfect Betta Fish.

Aside for the various color variations that can help to make your aquarium pop, Bettas can also be found with a multitude of different shaped fins, and tails, or even overlapping characteristics.

From long flowing fins, to shorter spiky tails or over sized fan-like tails, all Bettas technically speaking, are actually the same species. Each variation that can be found, is either due to a dominate trait being passed down, or a fairy common genetic mutation. This ultimately means, that Betta fish can be found with almost any combination of color, fin type or tail structure.

For more information on each of the individual Betta Fish’s fins and their function, please see our article on Betta Fish Anatomy.

Here are a few quick pointers to be aware of, when you are looking to get yourself a new Betta: 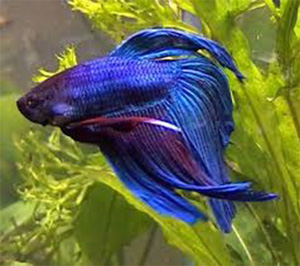 The most common tail type found on Bettas. Easily recognized by their long flowing asymmetrical tails. Almost all Veil Tails have their tail swooping downwards and constantly hanging. Even when flared their tails will often remain droopy, which makes them less flashy then other types of Betta.

Due to their initial popularity and demand, they have since become over breed and available in an abundance. As the market is over flowing with this type of Betta, many show circuits, will not permit the inclusion of Veil Tails anymore. As Veil Tails have become less desirable among enthusiast over the years, we have setup a blog where you can share you thoughts, or concerns about the fate of the humble Veil Tail in our article Should Betta Fish Breeders Stop Breeding Veil Tail Bettas? 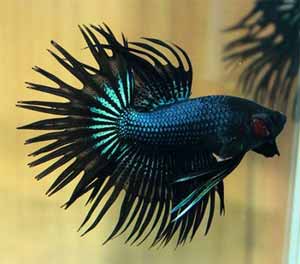 The Crown Tail fins have little webbing, with the majority of the fin’s rays extending beyond the fin’s body, usually as much as 2/3. This heavily spiky appearance, is where the Crown Tail derives its name from.

This type of Betta can be found with single ray, double ray, or even crossed/quadruple ray extensions along it’s tail fin. The tail will often have a fan of up to 180°, though less of a span is both common and acceptable. 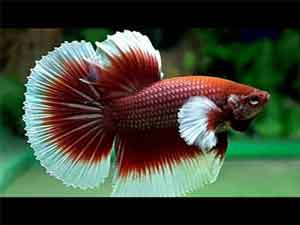 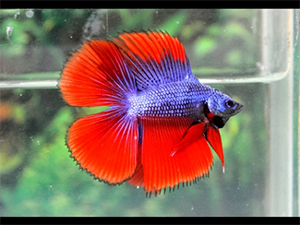 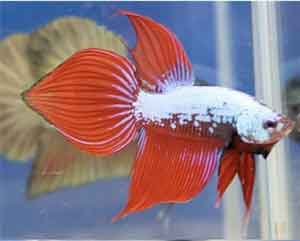 The base of the tail starts out wide, and as the tail extends out it curves in, where it forms a pointed tip at the end of the tail. Thus giving this Betta its name, as its tail happens to look a lot like the suit of spades from a deck of cards. 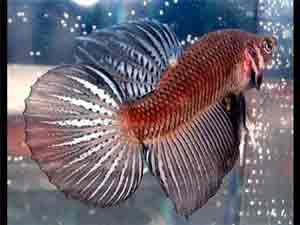 This Betta has a similar to the Delta, but instead of tapering off to form a triangular shape, the tail rounds of at the end instead, making a more circular shape. Some people have compared the Round Tail to the Plakat, just having larger fins. Their tails have also be known to have little to no crowning as well. 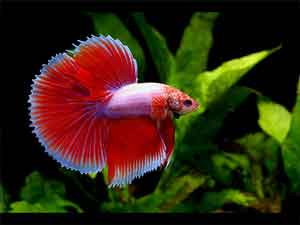 One thing to be mindful of with having such over-sided fins, is that they are prone to damage and tearing. Commonly refereed to as ‘blowing a tail’, this could be caused by the fins getting caught on sharp or rough edges of the aquascape, as well as from other fish. 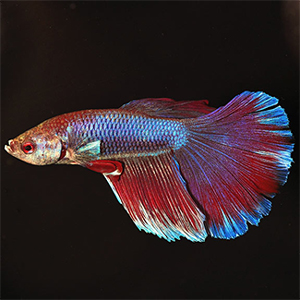 Deriving their name from a sideways Greek letter d. The Delta’s and Super Delta’s tails are practically symmetrical. In drawing a horizontal line down the side of the Betta, you will be able to see an equal amount of tail, both above and below the line. A true Delta Betta, has no spikes or crowning present on its tail. The wedding between the rays would be present, right up to the edge of the fin.

Standard Deltas, have their tails being narrower towards the body, and much wider at the tip, giving these Bettas a triangular shaped tail.

Super Deltas, have a very similar appearance to a Standard Delta. The main difference between them, is that when the Super Delta’s tail is flared, it can fan between 120°-160°. If the tail’s fan is 180° more more it is considered a Halfmoon Betta. 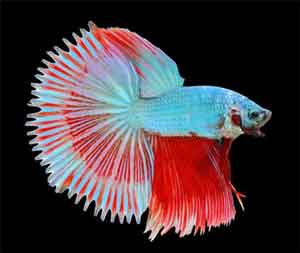 By selectively breeding the Crown Tails with Halfmoons, breeders are able to breed themselves Half-Suns. With slightest of crowning/combing along the fin’s rays and webbing, their tails have a 180° fan when flared. 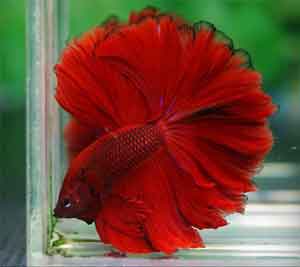 With softer more delicate looking fins then their Halfmoon counterparts. These Bettas have an excessive amount of branching on the rays of their fins. This can result in overlapping, or folds in the fins, which many people have likened to a rose petal, hence the name Rose Tail.
Similarly the Feather Tail has even more excessive branching of the fin’s rays, thus giving this type of Betta a more fluffy, ruffled, and feathery appearance. In both cases, these Betta fish have tails that fan out by 180° or more, and may even have long flowing pelvic and anal fins, with just as many branching rays. 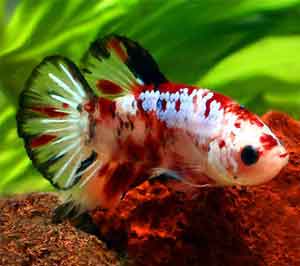 The term Plakat is generally given to Bettas with short fins. While their tails do tend to be short, they could still be seen with spiky and round variations. Making these Betta an ideal fish for those who wish to have a more modest, and less glamorous looking fish. The males can be easily mistaken for females due to their similar size and shape. One of the easiest ways to tell the difference between the males and females, is that the male Plakat can still be found with many striking color pallets. 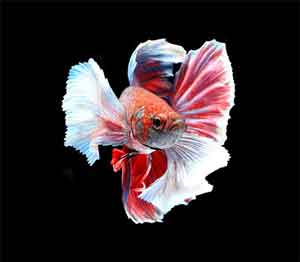 Bettas who have developed extra-large over-sized pectoral fins, are given the nickname of Dumbo Ears due to the elephant ear like appearance of their fins. These Betta are mostly found with smaller fins like the Plakat, but can also be seen on other Betta types, such as Crown Tails, Halfmoons, and even Double Tails.

As we have already mentioned, these different types of Betta fish are a result of cross breading different features into a new strain. As a result we would not be surprised to hear that your Betta fish has all the characteristics of a singular type of Betta, or even a combination of traits. In which case we would opt to define your Betta by its most distinguishing features, such as a Double Crown Tail, a Dumbo Eared Halfmoon, or even Rose Fined Half Sun (excessive branching of the rays in their dorsal, pelvic or anal fins, and a 180° fanned, slightly comb tail). While rare and hard to distinguish, some of these combinations can be found in early generational broods, or even in Bettas, who’s parents carry the recessive genes responsible for the these types of variations.